You Are Here: Home → Israeli forces kill 2 Palestinian teens in 24 hours, 5 Palestinians in a week 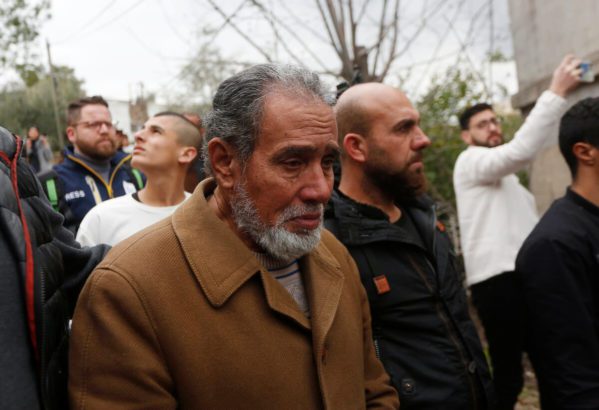 Relatives of Palestinian teenager Mohammed Abu Salah, 16, who was killed after Israeli forces entered the village of Silat Al-Harithya, mourn during his funeral in the West Bank city of Jenin, on Feb. 14, 2022.

Israeli forces shot and killed a Palestinian teenager in the occupied West Bank village of Nabi Saleh on Tuesday afternoon, bringing the total number of Palestinians killed by Israel over the past week to five; eleven have been killed since the start of 2022.

Israeli forces shot and killed a Palestinian teenager in the occupied West Bank village of Nabi Saleh, north of Ramallah, on Tuesday afternoon, bringing the total number of Palestinians killed by Israel over the past week to five.

The young man, identified as Nihad Barghouti, a resident of the town of Kufr Ein, was reportedly shot in the abdomen during confrontations between Israeli forces and Palestinians in Nabi Saleh.

A sad farewell to the Palestinian youth, Nihad Barghouti, who was shot dead by the Israeli occupation forces during confrontations in Nabi Saleh village north of Ramallah in the occupied West Bank.#FreePalestine pic.twitter.com/ayfl6kT3IW

Barghouti is the fifth Palestinian, and second teenager, to be killed by Israeli forces in the West Bank over the course of a week.

On Monday Israeli forces killed 16-year-old Mohammad Akram Abu Salah during a raid on the village of Silat al-Harithiya in Jenin. [His age is also given as 17.]

Israeli forces were raiding the village in order to prepare for the punitive home demolition of Palestinian prisoner Muhammed Jaradat, who was accused of killing an Israeli settler last year.

The raid sparked protests in the village, which drew crowds of Palestinians from Silat al-Harithiya and the surrounding villages, including the neighboring town of al-Yamoun, where Abu Salah was from.

According to Defense for Children International – Palestine (DCIP), Israeli snipers were stationed at positions around the village. When a Palestinian gunman reported fired towards Israeli military jeeps, Israel forces fired heavily towards the area where the shots came from.

After the confrontations had subsided, however, Israeli forces “ suddenly and without warning” began firing indiscriminately at the crowds of Palestinians, DCIP said, injuring dozens of people.

Among those injured were Abu Salah, who was shot in the eye, while his cousin was shot in the hand as he attempted to aid Abu Salah. DCIP said that the two were running away when they were shot by a sniper positioned approximately 250 meters (820 feet) away.

Mohammed was shot by Israeli soldiers during a protest in the village yesterday. #MilitaryEmbargo #FreePalestine pic.twitter.com/ELECDAy5tM

On Tuesday February 8th, Israeli forces shot and killed three Palestinians during a targeted raid in Nablus, in what the Palestinian Ministry of Health condemned as an “assassination.”

Israeli forces, who were traveling undercover in vehicles with Palestinian license plates,  surrounded the men’s vehicle and opened fire on it in broad daylight, showering the car with bullets. Photos and videos of the vehicle show it riddled with dozens of bullet holes.

The Palestinian Ministry of Foreign Affairs condemned Israel for its “heinous brutality”, saying in a statement: “This crime is part of a series of criminal field executions carried out by the occupation forces in accordance with the instructions and directives of the political and military level.”

Israeli forces and settlers have killed 11 Palestinians since the start of 2022.

NOTE: For a complete list of Palestinians and Israelis killed since 2000, please visit Israel-Palestine Timeline