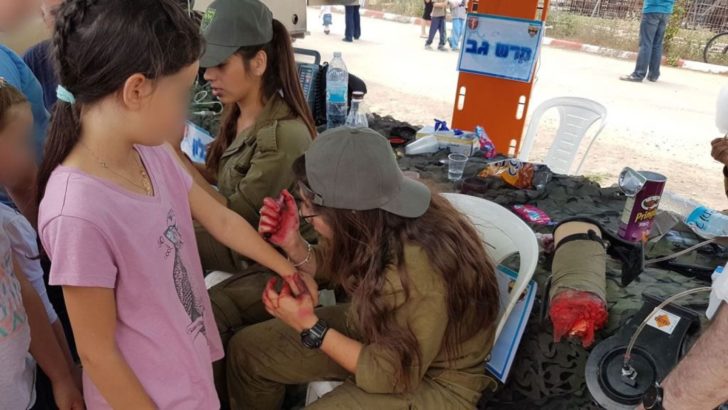 An Israel Defense Forces display for Independence Day in the settlement of Tekoa in the West Bank featured a booth where children could have their limbs painted to resemble shrapnel and stab wounds, with people present saying children as young as 5 were joining in.

The display, which was conducted by the Etzion Brigade’s medical staff, included dummies used in the army to illustrate battle wounds, including one that looked like a pair of amputated legs. A parent told the Times of Israel website that the soldiers even squirted a red liquid through the mock amputated legs to resemble blood flowing.

“As part of the Independence Day events, a number of depots in the Central Command region were opened to the general public, at which the district brigades displayed their activities,” the IDF Spokesman’s Office said in a statement. “This included dozens of displays including vehicles, surveillance and communications equipment. Among them was a display of the Medical Corps in which treatment methods were illustrated.”

Read the full article at Ha’aretz.