You Are Here: Home → Israeli army orders Jordan Valley farmers to evacuate land in order to raze it 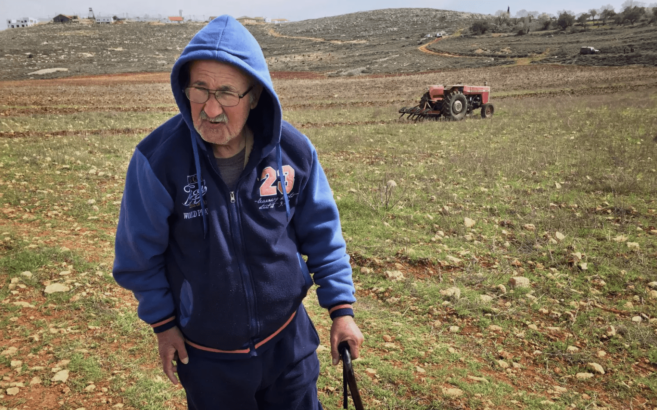 Fawzi Ibrahim, a Palestinian farmer, waited two months for the Israeli army to give him access to his wheat fields this year. He had only two days to try to plow and plant 50 acres of wheat, under the guard of Israeli army soldiers. The Israeli settlement of Esh Kodesh is behind him on the hill, and settlers watch from the road. (Anne-Marie O’Connor/For The Washington Post)

Israel is methodically clearing the Jordan Valley of Palestinians, most recently by shamelessly expelling Palestinian farmers with the intent of destroying their crops. International law forbids this action.

BETHLEHEM (Ma’an) — Israeli army forces reportedly ordered a Palestinian farmer in the Jordan Valley to evacuate his land on Tuesday, with forces saying they were going to raze the land, according to official Palestinian Authority (PA)-owned Wafa news agency. Wafa reported that Ahmad Assi Damra, from Hijlet al-Zour, east of Jericho, was ordered to evacuate his 25 dunum (six acre) plot of land, which is planted with palm trees, in order raze it. A similar order was reportedly made to another Palestinian farmer, Suleiman al-Zayed, who according to Wafa, has planted his four dunum plot in the village of Nuweimeh, north of Jericho, with olive trees. “The army ordered Zayed to evacuate his land in order to level it,” Wafa said.

The majority of the Jordan Valley is under full Israeli military control, despite being within the West Bank. Meanwhile, at least 44 percent of the total land in the Jordan Valley has been reappropriated by Israeli forces for military purposes and training exercises. Forming a third of the occupied West Bank and with 88 percent of its land classified as Area C, the Jordan Valley has long been a strategic area of land unlikely to return to Palestinians following Israel’s occupation in 1967.