You Are Here: Home → Israel to leverage Afghanistan exit to get US to ‘flex muscle’ against Iran 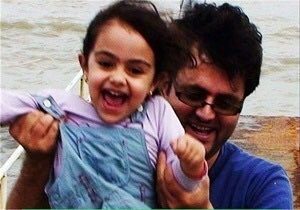 On July 23, 2011, Darioush Rezaeinejad, a thirty-five-year-old postgrad in electrical engineering was shot to death while he was picking up his daughter from kindergarten. His wife was also injured. Israel is widely believed to have been behind this attack and the murder of other Iranian scientists. (Twitter)

Israeli insiders say Israel plans to use the ‘humiliating surrender of the US to the Taliban’ to lead Biden to ‘flex US muscle toward Iran.’ During his upcoming meeting with Biden, Israeli Prime Minister Naftali Bennett’s mission will be to convince Biden that Iran ‘poses a tangible and significant threat to the entire world,’ and that the U.S. must take action against Iran… (Israel has long been targeting Iran)

By Ben Caspit, excerpted from Al-Monitor

“It’s possible to leverage events there in our favor [following the US departure from Afghanistan],” a former senior Israeli intelligence source told Al-Monitor on condition of anonymity. “I think that the shock experienced by Biden and his people, the harsh public reaction in the US and in the international media could have the opposite effect now, similar to a pendulum effect. The humiliating surrender to the Taliban could actually lead Biden to toughen up and decide to flex US muscle toward Iran, given the threat it poses to world peace and not just to the lives of local citizens.”

Israel would rather stay focused on the opportunities that could stem from the Afghan crisis. “There’s an opportunity here, too,” a senior diplomatic source in Jerusalem told Al-Monitor on condition of anonymity. “First of all, it seems to me that these events illustrate to Israel’s allies in the Middle East that only one significant force remains in the world stable and determined enough to stand up to Iran without blinking. That force is Israel.”

The diplomatic source added that as Prime Minister Naftali Bennett heads for his first White House visit later this month, he “must convince Biden that the US, as leader of the free world, cannot afford a series of pullouts and defeats in the Middle East.” Bennett is expected to tell the president that giving in to Iran after folding in Afghanistan could set off a disastrous chain reaction with deleterious effects for generations to come.

“It should be stressed,” the source said, “that Israel does not and cannot have any complaints against the Americans for departing Afghanistan. It is neither fair nor moral to demand that the American taxpayer continue to fund a struggle for the freedom of the Afghan people, and it is the president’s right to put a stop to the bloodletting in this sinkhole.” Bennett’s task will be to convince Biden that Iran is not Afghanistan: It poses a tangible and significant threat to the entire world, and the United States is not being asked at any stage to invade Iran or launch all-out war against it [sic].

“The Americans are the only ones with a credible, significant military option that does not involve boots on the ground, to destroy or at least severely damage Iran’s nuclear infrastructure,” said the diplomatic source. “Putting that option firmly and seriously on the table, and displaying determination to deploy it, is the only way to break though the dead end reached in efforts to block Iran’s nuclear program.”

Bennett is now preparing for this mission, although a final date for his sit-down with Biden has yet to be finalized. At the same time, Israeli intelligence is examining the stunning intelligence failure in assessing Afghanistan’s resilience in the face of the Taliban onslaught. “There are undoubtedly things that intelligence cannot measure, detect or identify,” a former Israeli intelligence source told Al-Monitor on condition of anonymity. “One can measure power, weapons, number of fighters, tanks and planes. It’s harder to measure determination, staying power and willpower. Many intelligence assessments have come crashing down in the face of a deceptive reality. We must study the Afghan case so that we can prevent a similar intelligence failure here. Unlike the US, Israel cannot afford mistakes of this magnitude.”

Addendum: Analyst Ali Abunimah points out that for years Israel “has been waging a not-so-covert war against Iran, attacking ships and facilities and murdering scientists.” Abunimah reports that Eran Lerman, an Israeli army colonel and vice-president of the Jerusalem Institute for Strategy and Security, discusses how the US should allegedly respond to the “blow to US prestige from the Afghanistan debacle.

“To counter this impact as much as possible, it would be vital for the US to demonstrate – elsewhere, since the Afghan case is clearly beyond salvation – that it is not a spent force,” Lerman writes.

Conveniently, the target he suggests for reinvigorated American belligerence just happens to be Israel’s number one regional enemy, Iran…

Addendum 2: The Times of Israel reported on August 11th:

To tell your Congress member to oppose all anti-Iran measures, go here! It’s important to prevent another war for Israel.