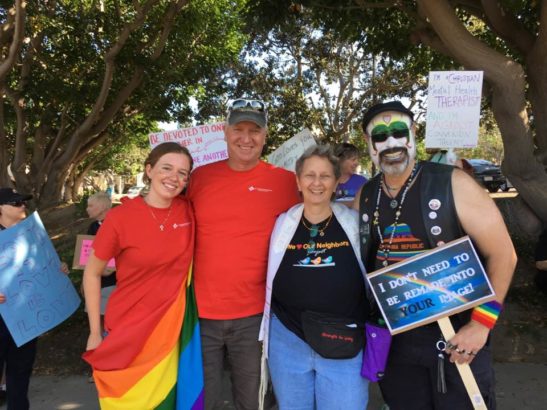 The Israel lobby is working to woo people like Andrea Beth Damsky, second from right. Damsky, active in numerous progressive causes, is a member of the La Mesa, California Environmental Sustainability Commission and on the California Democratic Party Executive Board. She was taken on an all-expenses-paid trip to Israel.

An $85 million Israel advocacy organization is taking local American officials identified as “progressive” on propaganda trips to Israel. While no one will divulge the rosters, we have a few names of California participants in these extravagant, influence peddling affairs

An Israel lobby organization is taking “Pacific Northwest Progressive Leaders” to Israel this week on an all expense-paid propaganda trip to Israel. Another group just returned on December 2nd from a similar trip, officially billed as an “Educational Seminar in Israel for Southern Pacific Progressive Leaders.” No one will divulge the rosters.

AIPAC used to sponsor such tours itself until it became illegal for lobbying organizations to organize these. AIPAC’s “charitable” arm, the American Israel Education Foundation (AIEF), then took up the practice. While such trips are now “legal,” they appear to violate the spirit of the law.

Craig Holman of the watchdog group Public Citizen told Roll Call: “The purpose of the 2007 travel restrictions was to remove these types of sponsored trips. Most of these trips tend to be nothing but an extension of lobbying. “ Unfortunately, Holman explains, “When it came to negotiating the travel rules regarding privately funding trips, a huge gaping loophole was written in to exempt nonprofits. … I call it the ‘AIPAC loophole.’”

AIEF is an $85 million operation that takes thousands of American officials and opinion makers on all expense paid trips. It pays for their international flights, hotel accommodations, tourist excursions, meals, drinks, etc. Roll Call estimates the cost of a trip for one Congressional representative to be $10,000.

And AIEF is just one of the many pro-Israel organizations that do this; some others are the American Jewish Committee’s Project Interchange (a 20 trip brought university presidents), Passages Israel, (backed by hedge fund billionaire Paul Singer), the Jewish Public Affairs Committee of Northern California (JPAC), and the American-Israel Friendship League, which has been operating since 1971 and largely targets young people. Last year it gave a special award to potential presidential candidate Michael Bloomberg. A fundraising video featured former Secretary of State Henry Kissinger, New York Times columnist Bret Stephens, Elie Wiesel, and others (see below). A 2012 trip brought university presidents.

These and other groups organize tours for every sector of American society, tailoring the trips carefully for each group. There are trips for military veterans, business leaders of all races and ethnicities, educators, athletes, students, etc, and every level of political office.

They treat each chosen group to an exotic, extravagant tour replete with visits to historic sites, exciting night life, beaches, religious sites, official offices, academics; whatever will appeal to the group members. There are meetings with congenial, impressive Israeli hosts of the political and social category that will best fit the visiting delegation, and the meetings even include a few hand-picked “Palestinian representatives” and Druze Israelis who play their role in the skillfully crafted tours.

And through it all those with political, professional, and/or economic ambitions will pick up something more: this is a group that has the money and power to further their careers. The particularly astute trip members will also pick up the converse: this is not a group to alienate.

Such trips are oddly public and secretive at the same time.

On the one hand, there are numerous videos extolling the sponsoring groups’ power and the trips’ effectiveness; diverse, wide-eyed Americans are seen being shown around Israel, and then, on cue, these American visitors describe how much they’ve learned and how wonderful Israel is (see below).

At the same time, however, the trips are sometimes run with extraordinary secrecy. AIEF’S website contains only one paragraph and an email address to contact for information. When we wrote asking who was going on the upcoming delegation for progressive leaders, the response was: “We don’t publicize our trip rosters.” Phone calls were unreturned.

The progressive participants were also unforthcoming about the delegations’ composition; some refused to provide this information, others pled ignorance. None of the participants seem to have publicly announced their trips ahead of time, perhaps aware that many progressive voters today are aware of Israel’s record of brutality against Palestinians, as described by former Israeli soldiers, documented in videos, and reported by human rights organizations.

So far we’ve only identified three of the participants on the current progressive trips.

(Simitian also went on a lobby sponsored trip to Israel in 2005, when he was a Democratic state legislator. He is already in Israel, apparently having departed on Wednesday. It is unknown why Simitian left early and whether AIEF is paying for the extra days, or whether Simitian is paying his own way.)

While it seems implausible that public elected officials would go on a trip without knowing the names of any other participants, staff members at both offices say they “have no idea” who’s going on the delegation. Damsky would not reveal which public officials were on her trip.

While not everyone is taken in by tours organized by advocacy organizations, the probability is that many will be influenced by them, some significantly.  That, of course, is why groups like IEAF shell out millions of dollars for them.

Damsky herself says: “I feel more educated on the issue than I did before.”

When asked if she would go on a trip organized by a group without a pro-Israel agenda, she said she would. However, she said she couldn’t afford to pay for such a trip herself and that the trip would have to be paid for by others.

And that’s the stumbling block.

Palestine solidarity groups don’t have anywhere near the astronomical budgets of the multi-billion dollar Israel lobby.

Therefore, it would seem, those with the most money will provide the free trips, and call the shots on this, as in so many other issues – unless Americans do four things:

(1) Prohibit public officials from going on trips paid for by others. Congress tried this before; now it’s time to close the loophole.  If government officials are going to take trips, let them pay for them out of their own pockets. Until such legislation is forthcoming, there are additional steps that can be taken:

(3) Require fairness. Voters should demand that officials who have gone on such lobby funded junkets afterward meet with people beyond the Israel advocacy crowd, so that they can learn facts the pro-Israel tours may have left out.

For example, some of the reports that came out while the southern delegation was in Israel included the fact that Doctors Without Borders reported that more than1,000 Gazans shot by Israel are at risk of infection, which could lead to permanent disabilities or death; Israel’s Shin Bet admitted the use of torture, and a number of human rights groups have documented the “routine use of torture” by Israeli forces; a report found that Israeli settlers, with IDF complicity, have destroyed 800,000 Palestinian olive trees since 1967.

Such post-trip meetings could inform these progressive officials that Israel was founded – in the words of an Israeli historian – by ethnic cleansing, that its settlements are illegal under international law, and that a typical day for Palestinians looks like this. Officials could be shown a list of those killed and learn about the victims:

Given that the Israel trips last a week or longer, the post-trip meetings should take place over a similar time frame and be accorded equal attention.

It seems possible that Damsky, Simitian, and Gioia would be willing to take part in such meetings, especially if they are invited publicly. These are individuals with a record of caring about human rights and indigenous peoples, and who oppose discrimination and oppression; if so, they will not refuse to learn about the plight of Palestinians.

Damsky, who is Jewish, has already suggested that she would meet with other groups, and Supervisor Gioia has stated that he wishes to learn the full facts. In an email response to questions for this article, he wrote: “My goal in this trip is to hear from many individuals, ask hard questions and critically learn. My learning will not end when the trip is done. I intend to continue to read and speak with those who hold positions on the issue.” Their contact information is below.

Finally, there is a fourth action that Americans can do about these influence buying trips, and this one is probably the most important:

(4) Support politicians who do not give in to Israel lobby pressure.

Many politicians go on these tours because they feel they have no choice – and they may be right. If they fail to dance to the Israel tune, there is a large likelihood that their opponent will get the money, organization, and media support that is usually required to win an American election.

Until and unless Americans who desire fairness, peace, and justice in Israel-Palestine help on political campaigns and make their wishes known at the ballot box, politicians of all backgrounds will continue to go on these trips, Israel will continue to get American tax money and support, and the tragedy will continue.

Ultimately, it’s up to all of us.

Passages is backed by Jewish hedge fund billionaire Paul Singer. The New Yorker reports: “Singer and similar investors have been compared to vultures, wolves, and hyenas. Bloomberg has called Singer ‘aggressive, tenacious and litigious to a fault,’ anointing him ‘The World’s Most Feared Investor.’”

Mondoweiss reports that Israel advocate Singer was originally anti-Trump and funded opposition research that turned into the famous Steele dossier on Trump’s alleged Russia connections. “But he switched over to Trump in the end… It’s a safe bet that he cut a deal with Trump on Israel.”

The article cites a 2015 CNN statement: “Singer, 71, is perhaps the [Republican] party’s most prodigious fundraiser, and his giving has been motivated primarily by two causes: protection of Israel and other Jewish causes, and support for the gay rights movement — a position that puts him at odds with many other leading players in the Republican Party.”

An earlier version of this article suggested that AIEF was founded in 2007. It had actually been founded in 1989.