You Are Here: Home → Israel-born Treasury official is at the center of U.S. policies on Iran 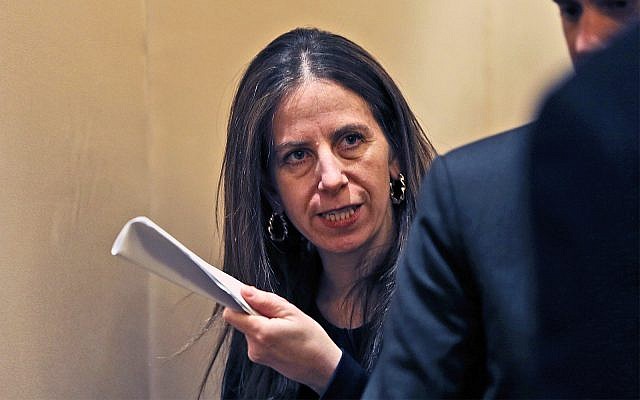 Sigal P. Mandelker, the undersecretary for terrorism and financial intelligence at the US Treasury in Dubai, United Arab Emirates, July 12, 2018. (AP Photo/Kamran Jebreili, from Jewish Insider)

At the Center of U.S. Iran policies is an Israel-born Treasury official named Sigal Mandelker. The Atlantic writes that her ‘hand is on the lever’ of crippling economic sanctions meant to force Iran’s ‘capitulation or demise’… meanwhile the Treasury Department refuses to divulge whether Mandelker is still an Israeli citizen… (Iran has long been in Israeli crosshairs)

According to a just published report in the Atlantic and a previous article by a former CIA officer, an Israeli-born individual is at the center of U.S. policies targeting Iran.

The Atlantic reports that financial sanctions are the “key tool” the United States has been using against Iran during  “the past three presidential administrations.” And Treasury official Sigal Mandelker” is the one with her hand on the lever.”

According to the article, “Because Trump is anxious to avoid war with Iran but also eager to push the Iranians, she is one of the most powerful officials designing the strategy Trump’s administration hopes will force Iranian capitulation—or, failing that, perhaps even the government’s collapse.”

Mandelker has been working on governmental policies since 2006 – the year in which U.S. officials “focused on finding ways to cut off Iran from the global financial system.”

According to Mandelker’s Treasury Department bio, from 2006-2009, Mandelker served as Deputy Assistant Attorney General in the Criminal Division of the Department of Justice. Prior to that, she was Counselor to the Secretary of Homeland Security, “where she advised the Secretary and worked extensively on intelligence, national security, counterterrorism, and border security matters.”

In 2017 Mandelker was named Under Secretary of the Treasury for Terrorism and Financial Intelligence. As we will see, this office was created at the behest of Israel partisans. It provides a powerful position from which to direct policies.

In the years just before her 2017 Under Secretary appointment, Mandelker was a partner at Proskauer Rose LLP, a powerful, politically connected international law firm with ties to Israel. The pro-Israel website Algemeiner,* reports: “Historically, Proskauer Rose was known as a ‘Jewish’ law firm.”  Partner Joseph M. Proskauer was “a Democratic Party stalwart, friend of politicians, state judge, civic and philanthropic personality, and major fund raiser for the state of Israel.”

The information is particularly relevant since U.S. attacks on Israel’s neighbors are often pushed by Israel partisans concerned with maintaining Israeli hegemony in the region.

Dual citizenship became permissible in the U.S. in 1967 under a decision by the Abe Fortas Supreme Court in a case on behalf of Israel that broke a 200 year American tradition. Today, many Americans feel that such a potential conflict of interest by governmental officials should, at minimum, be divulged to the U.S. public, and perhaps disallowed.

From Israel’s earliest days, Ben Gurion wrote about the need to neutralize Israeli neighbors who might potentially support Palestinian rights. This strategy has also been enunciated in various strategy documents, including the Yinon Oded Plan and A Clean Break: A New Strategy for Securing the Realm (the realm was Israel).

Israel and pro-Israel groups in the U.S. have frequently promoted anti-Iran policies, despite the fact that U.S. intelligence agencies have found that Iran is not developing nuclear weapons and that accusations claiming this have proven unfounded. (Israel has in the range of 100-300 nuclear weapons and has refused to sign the Non-Proliferation Treaty, the only Middle East state that has not signed the NPT.)

The Atlantic reports that Stuart Levey was the founding official in the role Mandelker now holds.  Mideast analyst Grant Smith writes: “AIPAC and its associated think tank, the Washington Institute for Near East Policy (WINEP), were instrumental in lobbying the president for the creation of the Office of Terrorism and Financial Intelligence unit early in 2004. The Israel lobby also vetted Stuart Levey who President Bush approved to lead the new unit.”

Israel partisans continued to abound. Levey was then succeeded by David S. Cohen (Israel advocate Alan Dershowitz recommended Cohen for his first job, with Israel partisan Nathan Lewin). The Secretary of the Treasury, Steven Mnuchin, is also an Israel partisan.

Former CIA officer and current executive director of the Council for the National Interest Philip Giraldi investigated this situation and found that Israel partisans have pervaded the office. He writes:

…A key component in the Israeli penetration of the U. S. government has been President George W. Bush’s 2004 signing off on the creation of the Office of Terrorism and Financial Intelligence (OTFI) within the Department of the Treasury. The group’s website proclaims that it is responsible for “safeguarding the financial system against illicit use and combating rogue nations, terrorist facilitators, weapons of mass destruction (WMD) proliferators, money launderers, drug kingpins, and other national security threats,” but it has from its founding been really all about safeguarding Israel’s perceived interests. Grant Smith notes however, how “the secretive office has a special blind spot for major terrorism generators, such as tax-exempt money laundering from the United States into illegal Israeli settlements and proliferation financing and weapons technology smuggling into Israel’s clandestine nuclear weapons complex.”

The first head of the office was Undersecretary of Treasury Stuart Levey, who operated secretly within the Treasury itself while also coordinating regularly both with the Israeli government as well as with pro-Israel organizations like AIPAC, WINEP and the Foundation for the Defense of Democracies (FDD). Levey also traveled regularly to Israel on the taxpayer’s dime, as did his three successors in office.

Levey left OTFI in 2011 and was replaced by David Cohen. It was reported then and subsequently that counterterrorism position at OTFI were all filled by individuals who were both Jewish and Zionist. Cohen continued the Levey tradition of resisting any transparency regarding what the office was up to. Smith reports how, on September 12, 2012, he refused to answer reporter questions “about Israel’s possession of nuclear weapons, and whether sanctioning Iran, a signatory to the Treaty on the Non-Proliferation of Nuclear Weapons, over its internationally-inspected civilian nuclear program was an example of endemic double standards at OTFI.”

Cohen was in turn succeeded in 2015 by Adam Szubin who was then replaced in 2017 by Sigal Pearl Mandelker, a former and possibly current Israeli citizen. All of the heads of OTFI have therefore been Jewish and Zionist. All work closely with the Israeli government, all travel to Israel frequently on “official business” and they all are in close liaison with the Jewish groups most often described as part of the Israel Lobby. And the result has been that many of the victims of OTFI have been generally enemies of Israel, as defined by Israel and America’s Jewish lobbyists. OTFI’s Specially Designated Nationals And Blocked Persons List (SDN), which includes sanctions and enforcement options , features many Middle Eastern Muslim and Christian names and companies but nothing in any way comparable relating to Israel and Israelis, many of whom are well known to law enforcement otherwise as weapons traffickers and money launderers . And once placed on the SDN there is no transparent way to be removed, even if the entry was clearly in error.

Here in the United States, action by OTFI has meant that Islamic charities have been shut down and individuals exercising their right to free speech through criticism of the Jewish state have been imprisoned. If the Israel Anti-Boycott Act succeeds in making its way through congress the OTFI model will presumably become the law of the land when it comes to curtailing free speech whenever Israel is involved…

Mandelker frequently speaks movingly of her parents’ suffering under the Nazis. She seems to equate Iran with Hitler, despite the fact that Germany was defeated almost three-quarters of a century ago, and that today it is her birth country that is based on discrimination against people who are not of the preferred religion or ethnicity.

The economic policies Mandelker and others have engineered against Iran are creating significant humanitarian hardship, which seems to be the plan – just as Israel partisans worked to destabilize and eventually attack Iraq. Today, we are teetering on the brink of escalation that could again cost untold lives and damage the U.S. even more.

Perhaps it’s time for Americans to stop allowing the Treasury Department to be weaponized by partisans working in the perceived interests of a foreign country.

* According to Wikipedia, “The Algemeiner Journal, known informally as The Algemeiner is a New York-based newspaper, covering American and international Jewish and Israel-related news. Former Senator Joseph Lieberman described the paper and the Jacobson Foundation as “independent truth telling advocates for the Jewish people and Israel”.[2] The Algemeiner‘s Advisory Board was chaired by Nobel laureate, writer and activist Elie Wiesel…. In 1972, Gershon Jacobson founded the Yiddish-language Der Algemeiner Journal, after consulting with the Lubavitcher Rebbe Menachem Mendel Schneerson.[3] He served as editor and publisher from its inception until his death in 2005.[4]

On October 2, 2019, it was announced that Mandelker would step down and be succeeded by Justin Muzinich..