You Are Here: Home → In historic move, Sen. Rand Paul places hold on $38 billion to Israel 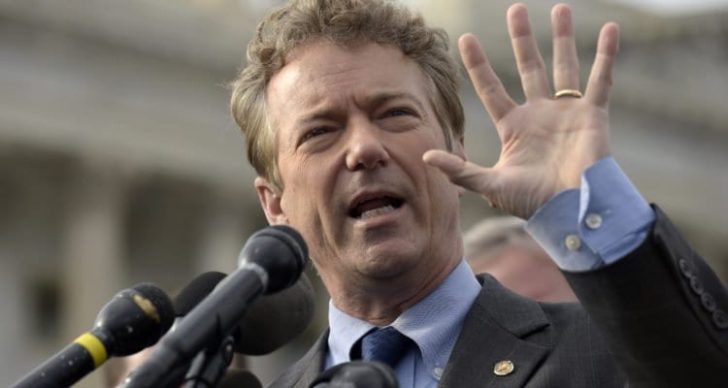 Rand Paul, U.S. Senator from Kentucky. Anyone who wishes Senator Paul to continue his historic action to block aid to Israel should email him and/or phone him: 202-224-4343.

(November 21, 2018 / JNS) Sen. Rand Paul (R-Ky.), who has a history of being skeptical about U.S. taxpayer funds going towards the Jewish state, has placed a hold on the U.S.-Israel Security Assistance Authorization Act of 2018, which provides Israel with $38 billion in military aid over the next decade.

This has caused backlash from organizations such as the American Israel Public Affairs Committee.

“This bipartisan legislation authorizes full funding of security assistance to ensure Israel has the means to defend itself,” AIPAC posted on Facebook with a link to “urge Sen. Paul to stop blocking aid to Israel.”

[Editor’s Note: Israel has one of the most powerful militaries in the world, including 100 to 400 nuclear weapons.]

“We are working hard to gain a final vote on this critical legislation,” AIPAC spokesperson Marshall Wittmann told JNS. “We believe that it will be enacted before Congress adjourns for the year.”

A hold is a procedure where a senator tells his or her floor leader that he or she does not want a specific measure to reach the floor for consideration, and therefore may filibuster any motion to proceed to debate the bill or other measure.

However, in this case, Majority Leader and fellow Kentucky Republican Sen. Mitch McConnell does not have to abide by Paul’s request.

Paul’s office did not respond to a request for comment.

The Senate and House of Representatives passed a version each in August and September, respectively. The former must pass its final version before U.S. President Donald Trump can sign it into law.

Anyone who wishes Rand Paul to continue his historic action should email him and/or phone him: 202-224-4343.