You Are Here: Home → Imprisoned Without Charge or Trial – Free hunger strikers now! 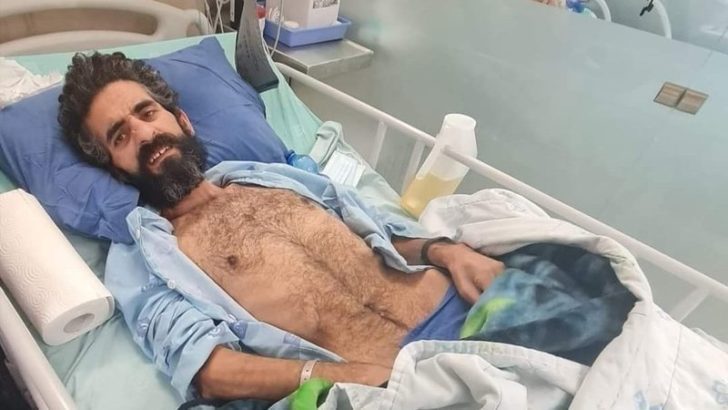 Palestinian prisoner Hisham Abu Hawash has vowed to remain on a hunger strike until he is released or told what charges Israel has against him. He has reached 140 days and is very ill. Please join over 13,000 justice-seekers around the world: sign and share this urgent petition before he dies.

Hisham Abu Hawash is the last prisoner on hunger strike of the group that began in the summer of 2021.  On December 26th he was transferred to an Israeli hospital after a severe deterioration in his health. He has severe mineral deficiencies and is no longer able to talk or move unassisted.

Abu Hawash has one demand: since Israel has not given him his day in court – or even announced charges against him – he wants to be freed. He will accept nothing less. International law is on his side.

Israel’s internal security, Shin Bet, claims he is an Islamic Jihad activist, and a danger to regional security. To date, Shin Bet has provided no explicit evidence. Abu Hawash has denied suspicions against him.

PLEASE SIGN & SHARE this petition to help free Hisham Abu Hawash and all hunger strikers & other administrative detainees, all imprisoned without charge or trial.

Palestinian prisoners stage hunger strikes in protest of their administrative detention – imprisonment without charges or a trial.

Prisoners staging hunger strikes are at risk of serious long-term health effects, as well as sudden death due to dehydration and lack of essential nutrients. Why would they risk their health this way? The answer is clear – according to B’tselem in Israel, “the detainees have no real opportunity to mount a reasonable defense against the allegations” and have little recourse other that striking to gain their freedom under a policy the gives impunity to the Israeli occupation to imprison them indefinitely.”

In Israeli occupation military prisons there are a total of 540+ Palestinians who are being held under the pretense of administrative detention. There are many who have been held for years without ever having the opportunity to prove their innocence or view the supposed evidence being used to justify their imprisonment.

These prisoners are often:

We want to bring them all home!!

Why were these Palestinian prisoners willing to die of starvation?

A chronicle of Israeli actions against Palestinians in 2021