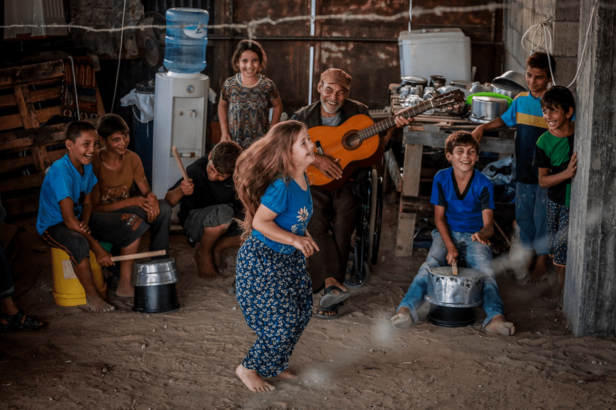 An impoverished family from the north of Beit Lahia enjoys a light moment. The father is strumming a guitar, a young girl is dancing while the boys are playing music with simple household utensils. CC BY-NC-ND / ICRC / Mouhamad Al-Barawi

A quick Google search for Gaza will show you multiple images of rubble and raw sewage pouring into the Mediterranean. These are the images that often appear in our mind together with the things we once heard or read about the place. For example, that it is “the world’s largest outdoor prison” or that it “will become unlivable”. But is this the way Gazans themselves see their homeland?

The photo competition we launched among young and extremely talented Gazan photographers was meant to answer this question. At first, we were not sure, whether a photo competition was even a good idea. Would people, who are trying to live their lives though the economic crisis and the electricity crisis, unable to access basic goods and services, have time and energy to spare for such a trivial and unnecessary thing as a photo competition? It turned out they did. And we were taken aback by the results.

Young photographers, contemplating their immediate surroundings, showed that life in Gaza is much more than crises, fences, isolation and the enormous suffering they cause. It is a quiet moment where a little fisherman, who almost seems like a part of the seascape, is looking under the sea surface, probably wondering what the future will be like for him and his generation, in a place where the young face 66% unemployment rate. It is children holding candles in the darkness, not metaphorical, but very real, as people have to organize their lives around four hours of electricity per day. It is also immense joy and laughter when an improvised family band explores music making potential of aluminum cooking pots.

This diversity of moments of happiness, laughter, quiet contemplation show that people of Gaza did not just put their lives on hold waiting for long overdue political solutions. Every single day, they demonstrate incredible resilience in the face of the harsh realities that surround them.