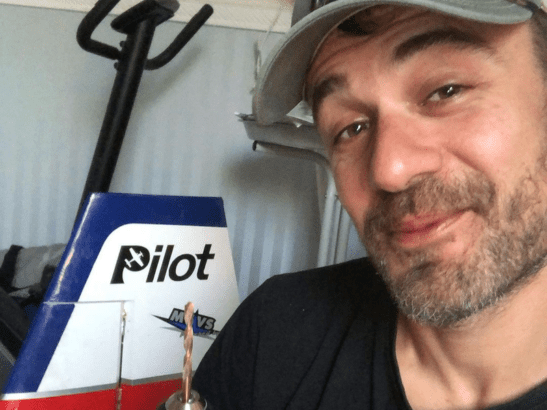 Hacker Grégory Chelli – known as Ulcan – who is wanted in France in connection with the death of Thierry Le Corre, indulges his many hobbies while living in a luxurious seaview apartment in Israel.

Furthering Israel’s reputation as a destination for fleeing criminals, Gregory Chelli has escaped France and is living the good life in the Jewish State.

As he enjoys leisurely days on an Israeli beach, Zionist hacker Ulcan (aka Gregory Chelli) has managed to put off for now any rendezvous with justice in his home country, France.

But the family of one of his alleged victims remain determined to have their day in court.

In June 2019, a judge in Paris ordered Ulcan, whose real name is Grégory Chelli, to stand trial in connection with a 2014 hoax prosecutors say caused the death of Thierry Le Corre, the father of journalist Benoit Le Corre.

Chelli terrorized the Le Corre family in retaliation for Benoit’s reporting about him. This culminated in Chelli making a false report to police that triggered an armed raid on the Le Corre home.

Prosecutors allege that the stress and shock of Chelli’s actions caused the heart attack that took Thierry’s life.

In a setback on 16 December, the Court of Cassation, France’s supreme court for criminal matters, set aside the trial order.

The court ruled that due to an error – the issuance of an arrest warrant before determining whether the accused was willing to turn up in court to face charges – the lower court would now have to repeat certain legal procedures before going to trial.

The ruling does not affect the July 2015 extradition request sent to Israeli authorities. France demanded that Chelli be sent home to face dozens of charges relating to his hacking attacks.

Antoine Comte, the lawyer for the Le Corre family, described the Court of Cassation ruling as a technicality.

“The case has not ended at all,” Comte told The Electronic Intifada by phone from Paris.

“Of course it is very sad for the family at this stage to wait some more time before this person is judged,” Comte added.

“Chelli, either in absentia or in France, should face trial in front of a criminal court because what he has done is a crime and it’s a disgusting crime.”

As the legal gears grind on, Chelli spends his days in a luxurious seaview apartment in Ashdod, enjoying the rooftop jacuzzi, posting pictures of himself and his dogs on Instagram and indulging his many hobbies including riding dirt bikes and beach buggies, flying model airplanes, racing remote control cars and smoking weed.

Chelli is accused of a series of hoax calls that have resulted in police violently raiding innocent people’s homes – so-called swatting attacks that can prove deadly.

His most notorious attack targeted the Le Corre family.

Chelli’s actions were reprisals for Benoit Le Corre’s reporting for the publication Rue89 on Chelli’s hacking attacks against pro-Palestinian websites.

In July 2014, Chelli, impersonating police, called Le Corre’s parents to tell them their son had been stabbed to death because of one of his articles.

After this upsetting incident, Benoit hoped that Chelli would be satisfied with his revenge.

“You tell yourself, OK, he’s made his call. Now they’re warned. You hope it won’t go any further,” Benoit recalls in a 2020 documentary broadcast by Canada’s French-language state television network Radio-Canada.

But Chelli didn’t stop there.

“Retract it or we are going to continue hacking the website of Rue89 and we’re going to really screw things over in your family.”

Days after his call to Le Corre’s parents, Chelli called police impersonating Benoit’s father Thierry, claiming to have killed his wife and baby and threatening to go on a shooting rampage.

Chelli made it appear to police that the call was coming from the home of Benoit’s parents. But when the police called back, according to Benoit’s account, there was no answer: His parents had unplugged their landline so they could sleep without harassment.

But instead, police converged on the house in the middle of the night. The couple were surrounded by officers with guns drawn, as police raided the home.

A few days after that, according to Benoit, his parents decided to take a vacation to recover from the stress they had endured. But on the first day of their holiday, Thierry Le Corre had a heart attack that put him in a coma and was to take his life on the last day of September 2014 at the age of 56.

Thierry was a former elected official in Le Meé-sur-Seine, a municipality about 40 miles south of Paris.

One tribute noted that the Notre Dame church in the town of Melun where Thierry’s service was held was too small to accommodate all the mourners. The funeral was attended by the entire city council and some 20 journalists from Rue89.

This charge alone carries a sentence of up to 15 years in prison.

A medical investigation published in part by Rue 89, stated that the elder Le Corre’s fatal illness was consistent with the consequences of a traumatic incident, evidence of a link to Chelli’s harassment of the family.

Notwithstanding the Court of Cassation ruling, Chelli still faces an active extradition request from France that Israel has failed to act on.

Although France and Israel do not have a bilateral extradition treaty, extraditions do take place.

Comte, the Le Corre family’s lawyer, also notes that Israel is a signatory of the European Convention on Extradition.

According to Comte this obligates Israel to open an extradition case in Israeli courts.

But some five years after France’s request for Chelli’s return, “the Israelis have not in any way implemented any sort of extradition case,” Comte said.

Israeli authorities “seem to see him as some sort of an ally in their struggle against criticism of Israeli policy,” Comte added.

The lawyer acknowledges that the case is “sensitive” as it involves Israel. Nonetheless, France has a duty to act.

“We would like the French government to oblige the Israelis to examine the case on extradition,” Comte said.

But the political reality is that France’s staunchly pro-Israel government – which prosecutes its own citizens for supporting Palestinian rights – has made no public statement supporting the Le Corre family’s quest for justice.

Asked what the French government is doing to pressure Israel, Comte said he does not know what goes on “behind the curtains.”

The only thing that is certain is that five years later, no extradition case has been opened by Israel.

“That is one answer to your question which I think is the only one which is worthwhile,” Comte said.

The foreign ministry in Paris told The Electronic Intifada, “We do not comment on current court proceedings.”

Chelli’s lawyer is Gilles-William Goldnadel, who calls himself a “personal friend” of Benjamin Netanyahu. (Chelli too is a staunch supporter of the Israeli prime minister.)

Goldnadel is described as “fanatically, obsessively pro-Israel” in a 2010 profile in the newspaper Libération.

An ardent right-winger, he also runs his own web-based TV channel dedicated to fighting what he calls “Islamo-Leftism.”

Goldnadel is well connected in France too: He traveled to Israel as the personal guest of President Nicolas Sarkozy in 2008.

In 2010 he was elected to the board of CRIF, France’s main Jewish communal body and Israel lobby group, and spent several years in that role. CRIF’s gala events regularly host French presidents.

Undoubtedly, moving in such proximity to top politicians would not hurt any effort to push back against an extradition request whose advancement may require political action.

Goldnadel did not respond to The Electronic Intifada’s request for an interview.

Chelli joins others in the haven for criminals

The Chelli case has contributed to Israel’s reputation in France as a haven for criminals, according to a May 2020 report in Libération.

The article focuses on an upsurge in scams and frauds targeting French companies allegedly committed by French citizens who have emigrated to Israel.

French Jews who move to Israel – encouraged by Zionist organizations – have a notoriously hard time integrating there.

Many opt to return home to France.

According to Libération, some French emigrants in Israel are attracted to the fraud industry because they have a hard time learning Hebrew and do not want to take legitimate jobs that pay less than they earned in France.

Defrauding French companies and individuals allows them to put their language skills and knowledge of France to nefarious but lucrative use.

Two such suspects, Fabrice Avraham Benini and Yann Moshe Zouaghi, were arrested by Israeli authorities last April and are awaiting extradition back home to France.

Investigators say the pair scammed hundreds of thousands of dollars from French firms, which they then laundered through several European countries.

According to Libération, French scammers in Israel are now taking advantage of the COVID-19 pandemic by posing as suppliers of medicines and protective equipment.

While fraudsters of course exist in every country and represent every nationality and religion, the context of the article in Libération is notable.

Its centerpiece is an interview with “David K.,” an Israeli police attaché stationed in France, who spoke to the newspaper on condition that his full name not be used.

Libération acknowledges that one of the reasons the Israeli official agreed to speak to the newspaper “is to combat the persistent idea that criminals find refuge in Israel.”

David K. dutifully recounts the close cooperation between Israeli authorities and police in France and other European countries to crack down on suspected financial scammers.

In 2019, Israel extradited to France a dual national accused in another major tax fraud, as well as an accomplice who who had fled to Israel several years earlier while on furlough from a French prison.

However, Libération observes that “In recent years, several French-Israelis wanted or convicted in France have given the impression of taunting their victims from the Jewish state.”

And there are other high-profile cases outside the French context.

It was only last month that Israel’s justice minister signed an order to extradite Malka Leifer back to Australia to face charges of child sexual abuse.

This came after a decade-long effort by her accusers to have Leifer, the former principal of a Jewish school in Melbourne, brought back home.

As The Guardian noted, Israel has been “under pressure to show it takes the case seriously after repeated court deferrals, including more than 70 hearings, and allegations of interference at the highest levels of government.”

And for decades, two of the men suspected of carrying out the 1985 Los Angeles bombing that killed Arab American community leader Alex Odeh have been living openly in Israel.

Odeh’s suspected killers were members of the Jewish Defense League, the violent anti-Arab group founded by Meir Kahane, and have remained involved in anti-Palestinian extremism.

Grégory Chelli too was a member of its French equivalent, the Ligue de Défense Juive.

It may be the case, as the Israeli police attaché insists, that France and Israel are cooperating more closely on fighting financial crimes – because both sides see an interest.

And while Israel may be willing to quickly extradite suspected scammers like Benini and Zouaghi, in part to improve its international image, those accused of political violence for the Zionist cause seem to enjoy immunity.

“He’s at the beach. He’s protected in Ashdod,” Benoit Le Corre says of Chelli in the Radio-Canada documentary. “He fears nothing.”

But for the Le Corre family, giving up on justice is not an option.

Whether Chelli comes back to France or faces justice in absentia, “they want a trial,” lawyer Antoine Comte said. “That’s what they really need.”