You Are Here: Home → The Forward: Did AIPAC Secretly Write Your Rabbi’s Sermon? 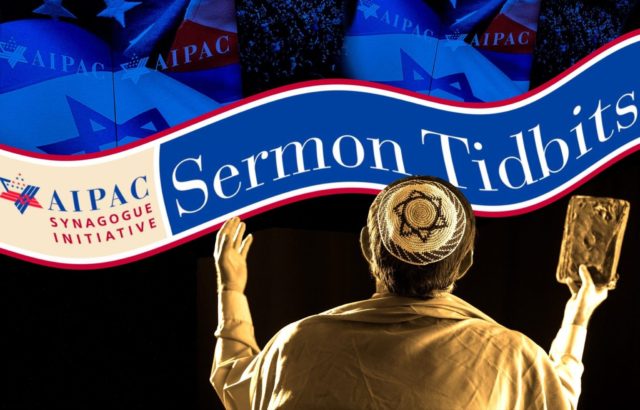 Image from the Forward, which reports that AIPAC sends sermons to rabbis across the U.S. to use, but reminds them to keep the source of their sermons secret.

By Josh Nathan-Kazis, The Forward

AIPAC may have secretly written your rabbi’s sermon.

Each week, the pro-Israel lobby the American Israel Public Affairs Committee sends out two prewritten sermons to rabbis across the United States, pushing AIPAC’s legislative agenda and its policy goals.

And each week, AIPAC reminds rabbis that they shouldn’t tell congregants where they got the pre-written texts. They are “intended for your use without attribution,” AIPAC writes in the footer of its mailer, titled “Sermon Tidbits.” “Feel free to use some or all of the material.”

Amid an ongoing debate over whether rabbis should preach politics, the AIPAC-drafted sermons show that some advocacy groups use their communications departments to influence rabbis’ messages — and that sometimes, that influence is hidden.

AIPAC declined a request for comment for this story.

“I am thankful for any organization that can send me information that can enhance my rabbinate and enable me to teach more deeply, more profoundly, in a more informed and insightful way,” said Rabbi Carnie Shalom Rose of Congregation B’nai Amoona, in St. Louis.

No rabbis informally polled by the Forward admitted to delivering the AIPAC-written sermons as written, though one said he used its texts as one of a range of resources in shaping his thinking.

“You would think that if there’s an idea they would want to get in the world, they would be proud of it,” said Rabbi Jill Jacobs, executive director of the rabbinic human rights group T’ruah. “There’s a rabbinic teaching that anybody who teaches something in the name of who said it helps bring about the redemption.”

Rabbis, like other religious leaders, are barred by federal law from endorsing candidates from the pulpit, and the AIPAC sermons stop far short of that line. But the broader question of political content in sermons has accelerated in recent months, as rabbis debated whether the Trump era has changed how they should weigh concerns about politicizing the pulpit.

AIPAC has distributed the weekly sermons since at least 2011, along with special editions for the High Holidays.

In one recent sermon, distributed October 9, AIPAC used the biblical story of Cain’s murder of Abel, related in that week’s Torah portion, to discuss an AIPAC-backed bill that would dial up sanctions against the Iranian-backed terrorist group Hezbollah.

The sermon opened with mention of Iran’s support for Hezbollah, then pivoted to the story of Abel’s murder and the mark that God put on Cain as punishment. The sermon then praised the bill, the Hizballah International Financing Prevention Amendments Act of 2017, which has passed the Senate. The sermon also mentioned its sponsors, Florida Republican Marco Rubio and New Hampshire Democrat Jeanne Shaheen.

“The recent actions of the U.S. Senate place a clear mark upon Hizballah that reminds everyone of its murderous ways,” the sermon concludes. “It is equally a sign to Iran and others who support Hizballah that they are, in fact, ‘their brother’s keeper,’” another reference to the Cain story.

The bill is currently awaiting a vote in the House.

An August 14 sermon argued against Trump administration cuts to foreign aid, including security assistance to Israel, connecting the argument to a saying attributed to Moses in that week’s Torah portion. Other sermons are less directly political. One August 7 selection told the story of a former member of Hamas who embraced nonviolence after an Israeli soldier offered him food, and tied the Israeli soldier’s act to something Moses did.

Yehuda Kurtzer, president of the Shalom Hartman Institute of North America, said he sees no problem with AIPAC’s distribution of the sermons.

“A more generous reading would be to say, ‘We’re trying to give you materials that would actually be appropriate within a synagogue context with [our] expertise that relates to Israel policy and American interests,” Kurtzer said. “They, like all of us in the business of rabbinic enrichment, want rabbis to be better informed.”

Historians and rabbis say that Jewish advocacy groups have long distributed such texts.

Jacobs said that her organization, T’ruah, sends out resources for rabbis to use in writing their sermons. She said she hopes that rabbis who use T’ruah materials would cite them. T’ruah also distributes weekly Torah commentaries, but Jacobs said that they are generally intended for lay readers, not rabbis.

Still, even the circulation of full prewritten sermons is not necessarily unusual.

“It’s been true for many many years that rabbis have made use of material that was provided to them,” said Jonathan Sarna, a professor of American Jewish history based at Brandeis University.

Rabbis circulate predrafted sermons privately and publicly, in publications and in private networks.

Lila Corwin Berman, a professor of American Jewish history at Temple University, said that in her research on historical sermons, she saw lots of shared language among sermons. Advocacy groups like the American Jewish Congress distributed materials historically.

“In fairness to rabbis, I would say that the average journalist gets sent all sorts of news releases,” Sarna said. “It’s not very different. Some places print the news release verbatim. Some rewrite it. Some would not dream of doing anything but their own news story.”

This article was originally posted by The Forward.