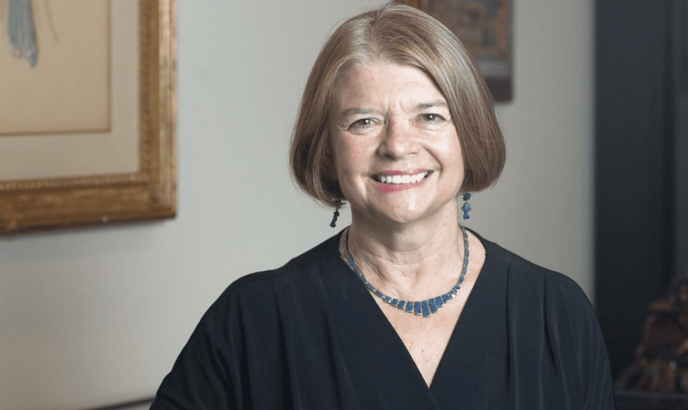 Margaret Ferguson, Distinguished Professor of English (Emerita) from the University of California at Davis.

In her letter of resignation from the presidency of the Modern Language Association, Dr. Margaret Ferguson eloquently reprimands her colleagues for allowing the passage of a resolution that prohibits academic boycott of Israeli scholars. Ferguson points to firsthand experience in Israel-Palestine, echoes the words of another former MLA president, Edward Said, and scarcely restrains herself from naming names of those who tipped the vote, as she declares her membership “a burden” that she chooses to “relinquish.”

To Paula Krebs, Executive Director of the MLA, and to the Officers and other members of the MLA Executive Council

I write with great regret to tell you that I have decided to resign from the MLA. My decision was long and hard in the making. No other past president has taken such a step, to the best of my knowledge, and I am not at all sure it is a step that will bear fruit. Please let me explain why I am leaving.

By passing Resolution 2017-1, which closed the door in a constitutionally unprecedented way on future debate about the Palestinian call for boycott of Israeli academic institutions, the Association has sent a message to the world that it wants protests about the conditions of teaching and learning in Palestinian universities off the table. Because the resolution misrepresents the MLA’s purpose in its opening clause, leaving out the Association’s long-standing efforts to advocate for humanities educators’ rights; and because the resolution prohibits future discussion of an issue of public concern, eleven past presidents with different views on boycott asked the Council not to treat the resolution as business as usual at its meeting last February. The decision to do just that means that the Association has gone on record as wishing to prevent further discussion of infringements of educators’ rights in the Occupied Territories; instead, the Association agrees that its proper business is with more pressing matters closer to home—home evidently defined as the United States that gives massive financial aid to Israel.  But the MLA’s multilingual members, both teachers and students, come from at least 104 nations; and MLA members of Palestinian descent have testified repeatedly to losing their freedom of expression and movement when they seek to enter the Occupied Territories in order to teach and do research.

As a member of a small, unofficial group of MLA members who visited West Bank universities in the summer of 2016, at the invitation of a member who works at the University of Bethlehem, I saw firsthand how teachers and students are prevented daily from doing their work of teaching and learning.  My experience in Israel-Palestine, detailed in this report, is one of the many reasons I am giving up my membership in an organization I have participated in and learned from for over 40 years—long enough to acquire the privileges of “life membership.” Those privileges are now a burden to me. I relinquish them to give myself a chance to speak out through a symbolic gesture of separation after having exhausted the means of protest available to me as a member.

My decision to resign is painful for many reasons. One is that my mother, Mary Anne Ferguson, served on the MLA’s Commission on the Status of Women in the late 60s and early 70s. She saw the Association, as I did then too, as a site in and from which humanities educators could work to effect social change, including improvements in what the current mission statement calls “workplace equity.” The question is whether “equity” will be interpreted narrowly or broadly. With the passing of Resolution 2017-1, the Association has opted for an interpretation eerily consonant with President Trump’s doctrine of “America First.”

In the years when I first joined the MLA and my mother was working on the Commission, the Association did vote after “divisive” debate to intervene in a public arena that was both national and international by making a statement against the U.S. Government’s conduct of its war in Vietnam (for a discussion of this historical statement, see my Presidential Address of 2014). Those were the years when the Delegate Assembly itself was created as a “voice for members” and as a structure that would enable the Association to become more representative (although that remains a difficult concept in the MLA’s documents and election practices). Since the Assembly was formed, the MLA has certainly become more open than it had previously been to the scholarly, pedagogical, political, geographical, and economic concerns of its members, most of whom do not work at the elite, East Coast American institutions from which the Association’s founders hailed in 1883. But the Association has evidently not become more open to discussing what I, and many others, consider to be one of the major assaults on access to education and academic freedom in our time. If the Association could amend its bylaws to affirm its commitment to allowing debate on all issues of public concern to members, I would eagerly rejoin.

For the time being, the MLA has taken an extreme and ethically untenable position by endorsing the idea, promoted by a group of members who were openly “assisted” by outside groups, that it is illegitimate for professional groups to protest Israel’s policies towards its Palestinian subjects. This despite the fact that the Executive Council clearly does not accept the narrow definition of the Association’s mission given in Resolution 2017-1 when it comes to speaking out about other communities of educators whose academic freedom and freedom of movement are threatened, whether in Trump’s America (see Resolution 2017-2) or in Erdogan’s Turkey.  Having spent part of the last year in a university in South Africa, I am acutely aware that the organization I was honored to serve was dishonorably silent about the South African regime’s apartheid policies.  At a watershed moment when even the mainstream press in the U.S. describes the creation of apartheid “bantustans” in Jerusalem neighborhoods just outside the “separation” wall, I find that I must leave an Association that has chosen again to remain silent, this time by actively proscribing debate.

Torn as I have been about what to do in the wake of Resolution 2017-1, I have found myself thinking hard about how another former MLA President, Edward Said, might have viewed these matters as he pursued his long effort to balance pessimism of the intellect with optimism of the will. Because he is dead, I cannot ask him for counsel. But I can ask you to consider some words from his book After the Last Sky: Palestinian Lives: “Memory adds to the unrelieved intensity of Palestinian exile. Palestine is central to the cultures of Islam, Christianity, and Judaism . . . . There is no forgetting it, no way of overlooking it.” The Palestinian call for justice will keep coming, and the MLA resolution enjoining deafness to it will be questioned from within and from outside in the coming years.

As the MLA’s elected leaders resume work after the 2018 Convention, where members in many sessions engaged with President Diana Taylor’s theme (#States of Insecurity) by exploring its premise that “the academy cannot be separate from the political, economic, and ideological turmoil of our time,” I hope that there will be robust discussion in your meetings about how, why, and to whose benefit the Palestinian call for boycott was deemed officially unspeakable by the world’s largest association of teachers of the humanities.

Distinguished Professor of English (Emerita)
University of California at Davis