You Are Here: Home → Flashback: NYT Reverses Time to Put Retaliation Before Attack in Gaza 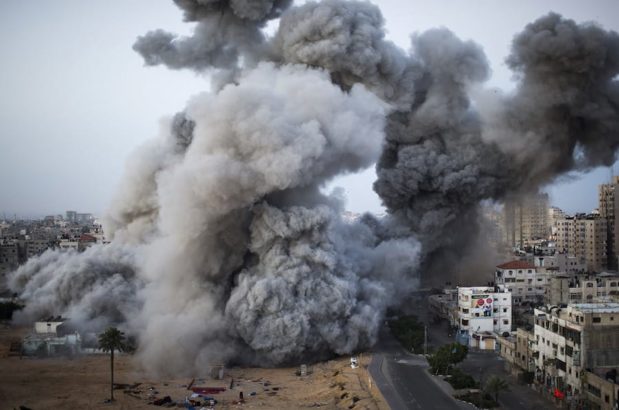 In the article, the Times headline had reversed the actual sequence of events that the article itself then described in the first paragraph.

The story’s headline “Israel Launches Airstrikes After Attacks From Gaza” indicated that Gazans attacked Israel first. But the article soon explained that the rockets came after Israelis launched an airstrike in Gaza first, killing a Palestinian and injuring several others, including four children.

Surveys show that just 41% of Americans actually read news stories beyond the headlines. Another study found that 60% of links shared on social media had never been clicked; meaning people shared the links without even opening them or reading them.

Headlines have more power over the public’s perceptions and opinions than most of us probably realize.

The Times’ distorted chronology reinforces existing tropes about about who the aggressors are, who’s to blame for the violence, and who deserves “retaliatory” or “defensive” violence.

If Americans Knew is currently working on a study of New York Times’ coverage of Israeli and Palestinian deaths in 2016. Please stay tuned.

Below is the email alert that FAIR sent out:

NYT Reverses Time to Put Retaliation Before Attack in Gaza

Media activist Alison Weir (10/8/12) calls attention to a remarkable New York Times report (10/9/12) on Gaza violence. While we’ve come to expect a pro-Israeli bias from the Times, it’s still surprising to find the paper using time travel to make sure that events happen in their proper sequence.

The headline of the Times piece is:

But if you read the article, you immediately find that the sequence is exactly reversed:

Gaza militants fired a barrage of rockets and mortar shells into Israeli territory on Monday, causing no casualties but some property damage, after an Israeli airstrike in southern Gaza on Sunday killed one Palestinian and wounded at least nine others.

Emphasis added–because the Times went out of its way to deemphasize this crucial fact.

Another thing deemphasized by the Times‘ Isabel Kershner and Fares Akram–in fact, not mentioned at all–is that among the “nine others” wounded by the unprovoked Israeli strike were an infant and four other children (International Middle East Media Center, 10/8/12). They did find room to mention, however, that “several goats were killed in a petting zoo in an Israeli communal farm.”