You Are Here: Home → Farewell, Nikki “Twist and Shout” Haley 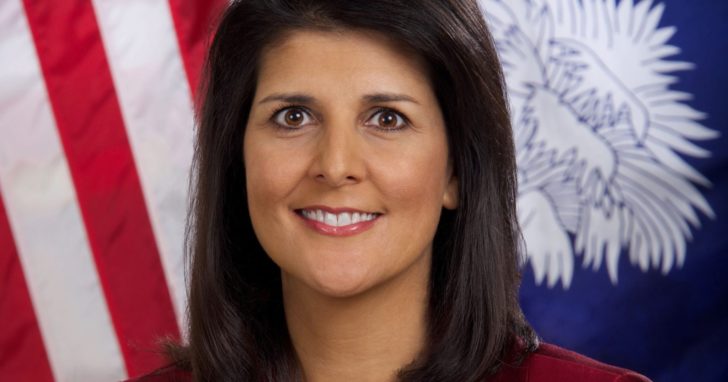 Nikki Haley, soon-to-be former US Ambassador to the United Nations

She twisted facts, she twisted words, and then she shouted her distortions from the podium of the United Nations to the mainstage of AIPAC. The world – with a few notable exceptions – knew better than to believe her.

Nikki Haley laid it all on the table in her Senate confirmation hearing opening statement. After her obligatory rags-to-riches bio, it was all about MAGA by defending our dearest ally, Israel.“Nowhere has the UN’s failure been more consistent and more outrageous than in its bias against our close ally Israel…This can not continue…”

Everyone in that chamber understood what her priorities would be – should they confirm her.

Okay, Nikki, let’s do some accountability work. Let’s see whether you were a principled, trustworthy representative of the people.

Nikki Haley had choice words on the one-year anniversary of Security Council Resolution 2334, which called for a halt to Israeli settlement-building on Palestinian land. Then-President Obama had instructed his ambassador to abstain from the vote, allowing the resolution to be adopted (normally the US vetoes any resolution critical of Israel). Haley’s speech was nothing if not creative:

On the surface, Resolution 2334 described Israeli settlements as impediments to peace…But in truth, it was Resolution 2334 itself that was an impediment to peace. This Security Council put the negotiations between Israelis and the Palestinians further out of reach by injecting itself, yet again, in between the two parties to the conflict.

Nikki dug in deeper – and mind you, this is not in a press conference Q&A. This in her Senate confirmation opening statement:

By misplacing the blame for the failure of peace efforts squarely on the Israeli settlements, the resolution gave a pass to Palestinian leaders who for many years rejected one peace proposal after another.

Why did Palestinian leaders reject those peace proposals, Nikki? Let’s ask someone who knows. Palestinian Authority President Abbas himself said, “what prevents the achievement of this desire [a viable state] is Israel’s continuation of its occupation and settlement activity and imposing realities on the ground” (emphasis added).

A settlement freeze has been on Israel’s To-Do list for peace since at least 2002, was part of the 2003 Roadmap, and has been a Palestinian demand ever since. To suggest that the lack of peace has nothing to do with settlement expansion is to ignore the facts.

Palestinians had other demands as well. In the words of Middle East analyst Nathan Thrall, during the course of many “peace” plans,

The Palestinians chose no agreement over one that did not meet the bare minimum supported by international law and most nations of the world…the establishment of a Palestinian state on the pre-1967 lines [with minor land swaps]. The Palestinian capital would be in East Jerusalem…Israel would withdraw its forces from the West Bank and release Palestinian prisoners. And Palestinian refugees would be offered compensation, a right to return not to their homes but to their homeland in the State of Palestine…

Palestinians’ refusal to accept peace proposals was simply because they were unacceptable.

Nikki missed the truth train on this issue.

Nikki’s twist on the blacklist

“Given the chance today,” Haley’s statement continued, “the United States would veto Resolution 2334 for another reason. It gave new life to an ugly creation of the Human Rights Council: the database of companies operating in Jewish communities.”

Tell us more, Nikki. Tell us how that blacklist includes companies that do business in the illegal settlements, furthering their entrenchment and land confiscation. “Jewish communities” is code for “people living on someone else’s property and consuming someone else’s resources without permission.”

Nikki’s twist on the embassy move

The relocating of the US Embassy in Jerusalem was not popular with…well, just about the entire world, except for the US and Israel

“[W]e stand by the will of the American people by moving our US embassy.”

This is a whopper of monumental proportions. The will of the people was obviously not consulted before the announcement in December 2017. According to a CNN poll, only 36% support moving the embassy from Tel Aviv to Jerusalem.  In fact, most Americans – two-thirds – don’t even want the US to take sides in the Palestine/Israel issue.

Nikki, this does not indicate you are accountable to the American people.

No soup for you

“Our hand remains extended to both parties,” said the Ambassador, who would soon insult one of the parties – try to guess which one – in her assertion that they “have their hand out wanting UNRWA money” while at the same time they ‘continue to bash America.”

By bashing, she is referring to the PA’s protests and suspension of diplomatic talks due to recent actions on the part of the US government. These virtuous, honest-broker-ish actions included moving the embassy, declaring Jerusalem the undivided capital of Israel, withholding donations to UNRWA and even to hospitals, and closing the PLO office in Washington. How dare they complain?

And by “have their hand out,” she is referring to the Palestinians’ inability to feed, clothe, shelter, and educate their children because of Israeli occupation and blockade – and subsequent reliance on UNRWA aid. What ingrates.

Hanan Ashrawi of the PLO executive committee warned that the loss of this aid could have serious repercussions:  “If you deprive people of their education, their health — their future — this is extremely serious and dangerous. Who is going to step in? If you want to hand them over to the religious schools, to Hamas, then you have to live with the consequences.”

Do the American people really want their government to withhold humanitarian aid from children, Nikki?

“The United States,” Nikki scolded, “has done more than any other country to assist the Palestinian people. By far. Since 1994, we have given over $5 billion to the Palestinians in bilateral economic assistance, security assistance, and humanitarian assistance.”

In 24 years, $5 billion? The US gives that much to Israel every 15 months. And Israel is not under a blockade or suffering from a humanitarian crisis.

Nikki, you were not straightforward when you made $5 billion sound like a lot of money.

She knows if you’ve been bad or good

Haley tweeted ahead of the UN vote on Trump’s decision to move the American embassy, “On Thursday, there will be a vote at the UN criticizing our choice. And yes, the US will be taking names.”

Sure enough, the US took names – the (short) list of countries that stood with the US included, of course, Israel, and also the powerhouse trio of Guatemala, Honduras, and Togo, plus 4 wee island states with a combined population less than that of Boise, Idaho. 35 countries courageously abstained, and 21 didn’t even show up that day. (“Nothing says ‘I don’t not support you’ like failure to attend an emergency session of the United Nations General Assembly.)

Later, at an AIPAC conference, Nikki recalled, “We lost that vote, but to many people surprise, 65 countries refused to go against us. In the long history of U.N.’s mistreatment of Israel, that’s quite a record.”

One-third of the UN’s countries didn’t vote against the American position. Be honest, Nikki. You’re talking about 2 small central American countries, one tiny African country, and a bunch of no-show and no-do countries. Oh, and Boise, Idaho.

…And so much more

The Nikki Haley Twist List could go on and on. (Someday, soon, perhaps it will. Subscribe to this blog and you’ll be the first to hear about it.)

There’s the time she said, “No country in this chamber would act with more restraint than Israel has” after Israeli snipers had killed 60 Palestinians in the course of a few hours. Then she turned on her heels and walked out of the chamber when it was the Palestinian envoy’s turn to speak.

Or “Unlike in some UN member countries, the United States government is answerable to its people.” That’s a knee-slapper.

Or how about the time Haley said, “If there’s anything I have no patience for, it’s bullies – and the UN was being such a bully to Israel because they could.”

Or, “When I come to AIPAC, I am with friends. And at the UN, we don’t usually have very many friends.”

Or her preposterous statement from the day her resignation was announced: “Look at what has happened in two years with the United States on foreign policy,” she said. “Now the United States is respected. Countries might not like what we do, but they respect what we do.”

Nikki Haley, you may have spoken up for Israel in the United Nations these past two years, you didn’t represent the American people well. Bye-bye.