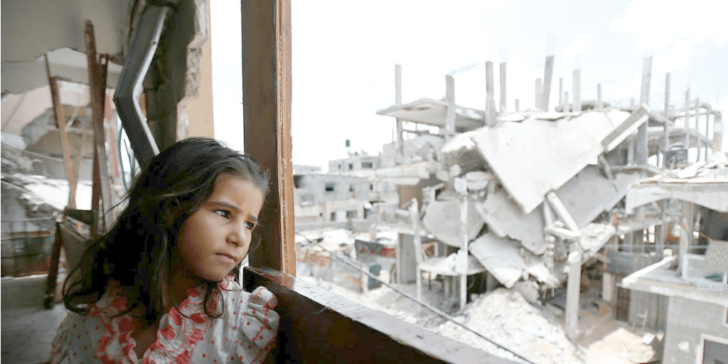 A Palestinian girl in Gaza looks out the window of her partially destroyed home. (PHOTO: UNICEF)

Israeli officials have cut off electricity to almost 2 million Gazans for all but three or four hours a day—in conjunction with nominal Palestinian leader Mahmoud Abbas, who has cut funding for Gaza’s electricity in an effort to punish his political rivals in Hamas. The Gaza Strip, which remains under effective Israeli control despite the 2005 withdrawal of Israeli troops, requires 450 megawatts daily, but since June has received only around 150 megawatts per day. The power cuts, according to UN humanitarian coordinator Robert Piper, severely undermine “critical functions in the health, water and sanitation sectors,” and have created a “looming humanitarian catastrophe.”

The vast majority of US media also ignored a devastating UN report published Tuesday, documenting the humanitarian conditions in Gaza over the past ten years.

Neither the electrical crisis nor the UN report has been covered by the New York Times, ABC, CBS, NBC, CNN, MSNBC or Fox News—though the Times and ABC did run AP reports on the former.

The Washington Post  (6/22/17) reported on the electricity cuts just over three weeks ago, but made sure to note in their headline “it’s not all Israel’s fault.” The Post (7/12/17) also mentioned the Gaza electricity cuts in a broader piece, told from Israel’s perspective, about that country’s fears that “Hamas will go to war.”  NPR did not report on the electricity crisis, but unlike the Post, it did have a piece (7/11/17) on the UN report.

Attacks on Israeli forces—even ones that occur, like this week’s strike, in illegally occupied territory—are framed as random acts of hate with no political context. None of the above reports on the Jerusalem attack made any mention of the increasingly dire situation in Gaza. Nor, even more conspicuously, was there any mention of Israel’s killing of two Palestinians in a West Bank refugee camp less than a day before.

The routine, “factored-in” suffering of Palestinians—even when ramped up to hellish levels—is barely worth a mention by US media. It just is. And when it is touched on, it’s generally framed as Hamas or the Palestinian Authority’s fault, with the broader role played by Israel’s devastating, 50-year-occupation downplayed or omitted.

This article was originally published by FAIR.org.