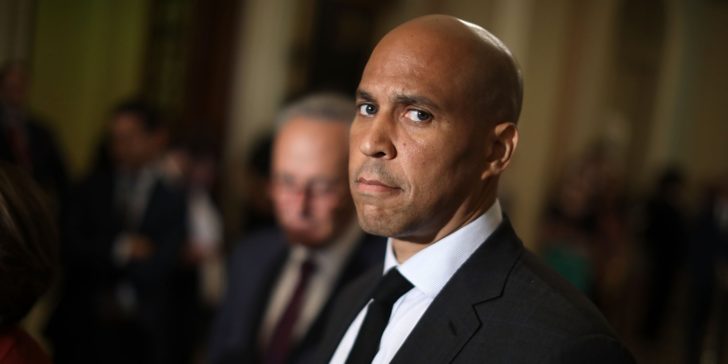 Presidential candidate Cory Booker indicates that he may not try to re-enter the Iran nuclear deal, sounding eerily like pro-Israel NORPAC, not to mention some prominent Republicans. Coincidence?

by Eli Clifton, reposted from LobeLog

In last Wednesday’s Democratic debate, Sen. Cory Booker (D-NJ) stood apart from the other candidates on the stage by declining to commit to return to the Iran nuclear deal. Videos viewed by LobeLog show that Booker’s unusual position is shared by NORPAC, a pro-Israel PAC aligned with the American Israel Public Affairs Committee (AIPAC). As Booker’s biggest donor, NORPAC contributed $185,871 to Booker’s campaign committee in 2018, a cycle in which Booker wasn’t even up for election.

During the first Democratic debate, the candidates were asked whether they would commit to returning to the nuclear deal. Every candidate on the stage except Booker raised their hand.

We need to renegotiate and get back into a deal, but I’m not going to have a primary platform to say unilaterally I’m going to rejoin that deal… I am going to do the best I can to secure this country and that region and make sure that if I have an opportunity to leverage a better deal I’m going to do it.

That language closely parrots Trump’s claims that he can use the leverage of abrogating the Iran deal to negotiate a better deal with Iran. Under the guidance of Iran hawks like John Bolton and Mike Pompeo, this strategy has brought the United States 10 minutes away from a war with Iran and no closer to a better deal.

A training video published on YouTube in May 2019, showed NORPAC leadership preparing members for a “NORPAC Mission” to Washington, in which the group’s members meet with members of Congress to advance the group’s agenda.

Ben Chouake, NORPAC’s biggest donor in the 2018 cycle, gave introductory remarks on what the mission should convey to members of Congress regarding Iran. He emphasized the volatile situation in the Gulf and offered a litany of the ways that he sees Iran posing a threat to the United States, Israel, and their allies in the Gulf. Chouake rolled out the talking points that Iran is an “existential threat to all our allies in the area” and “an 800-pound gorilla in the room which is causing all kinds of problems.”

But Chouake made clear that NORPAC only wants to highlight the alleged dangers posed by Iran, not be held accountable for advocating for war.

“The last thing we want is to be accused of facilitating the initiation of a war,” said Chouake. “We don’t want a war but we want to tell our leaders this is a very, very big problem and one way or another you have to address it.”

Laurie Baumel, co-chair of the 2019 Mission, went on to add, “…[T]o just reenter the JCPOA as many in Congress have suggested does not seem to be a winning formula to me and I think we can certainly tell [members of Congress] about that.”

https://youtu.be/LAuVQ7tEXzg  [Editor’s note: the video has been removed by the user.]

Indeed, Booker’s comments were not identical to Baumel’s, but the meaning was the same. NORPAC and Booker oppose upholding the commitments made by the Obama administration and the P5+1 via the Joint Comprehensive Plan of Action (JCPOA), a deal that Booker actually ended up supporting in 2016.

Either Booker is echoing his biggest donors or he is coincidentally out of step with the Democratic Party and aligned with NORPAC, which just happens to be based in his home state of New Jersey.

With candidates looking to distinguish themselves in a crowded Democratic primary, Booker may have done just that and secured himself valuable campaign cash to fuel his presidential campaign. But Democratic voters aren’t with him on Iran. A May 2019 J Street poll found that 72 percent of Democratic voters support reentering the JCPOA while only 18 percent oppose reentering.

Booker is clearly the candidate catering to that 18 percent.

Senate bill S 892 Iran Sanctions Loophole Elimination Act of 2013, which was introduced the day of the mission, has 21 official sponsors. This has the potential to deprive Iran of $100 billion in foreign currency.

House H.R. 850 Iran Nuclear Prevention Act passed the House Foreign Affairs Committee last week and added the text of S 892 into its markup. We helped to facilitate the addition of the Senate text into the house bill.

At the meeting with the appropriation committee’s chair, Senator Mikulski, we were told the foreign aid to Israel would be a priority, and the office would seek to minimize any effect of sequestration.

The advocacy of the thousand NORPAC advocates in Washington makes all the difference. To those who took the time and effort, I say, Keep up the good work.