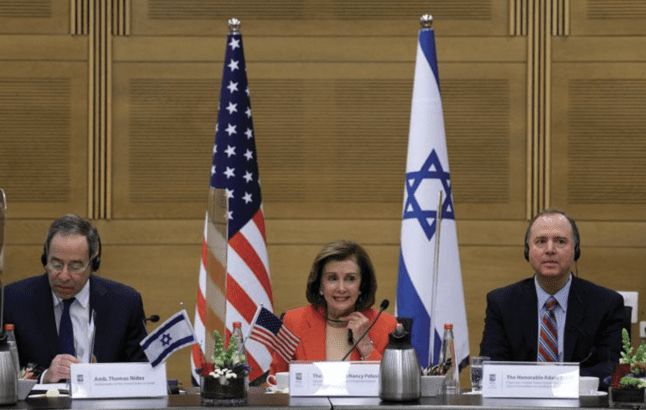 Speaker of the U.S. House of Representatives Nancy Pelosi sits between Rep. Adam Schiff (r) and U.S. ambassador to Israel Thomas Nides, during a meeting at the Knesset (Israeli Parliament) in Jerusalem on Feb. 16, 2022, a month before Congress earmarked $4.805 billion for Israel, with no strings attached.  (ABIR SULTAN/POOL/AFP VIA GETTY IMAGES)

“Congressional Zionists” managed to sneak an extra $1 billion to Israel in this year’s budget, on top of the usual $3.8 billion. A whole $219 million is earmarked for non-Hamas Palestinians.

ON MARCH 9 AND 10, Congress passed the consolidated “omnibus” appropriations bill funding the government through the end of FY ’22. President Joe Biden signed it March 15 as PL 117-103.

Funds for most Middle East countries were not earmarked in the bill, but Morocco, Tunisia and Lebanon historically have received funds from the economic or military aid accounts.

As usual, the largest earmarked amounts are for Israel, $4.805 billion! This includes $3.3 billion in military aid, which can be disbursed immediately (so Israel can earn interest on it until it’s spent), of which $785,300,000 can be spent in Israel with no strings attached, $500 million for so-called “Israeli Cooperative Programs,” and $5 million for “refugees” resettling in Israel.

After many failed legislative attempts to pass H.R. 5323, giving Israel an additional $1 billion, supposedly to replenish the short-range Iron Dome missile defense system used during the May 2021 fighting between Israel and Hamas, congressional Zionists managed to get it included in the omnibus bill.

For Egypt, the bill earmarks the expected $1.3 billion in military aid, but with conditions. The first is to withhold $235 million pending a certification related to democracy and human rights. A second condition withholds $85 million because of Egypt’s treatment of political prisoners.

Significantly, one non-appropriations-related provision in the omnibus incorporated the previously introduced bills, H.R. 2748, sponsored by Rep. Bradley Schneider (D-IL) in April, and S. 1061, sponsored by Sen. Rob Portman (R-OH) in March 2021, “to encourage the normalization of relations with Israel.” When the omnibus bill was passed, H.R. 2748 had 332 cosponsors and S. 1061 had 72.

After reports that negotiators for a new Iran nuclear deal made some progress, five congressional letters were sent and five measures were introduced threatening to block any agreement.

On Feb. 7, Sen. Ted Cruz (R-TX), with 32 Republican cosigners, sent a letter to Biden reminding him that the Iran Nuclear Agreement Review Act of 2015 requires the president to submit any Iran agreement to Congress for approval. His letter was followed by four similar letters, with the Feb. 14 letter initiated by Rep. Mike Gallagher (R-WI), gaining the most support with 163 House Republicans signing.

Only one of the five letters, the March 10 letter to Biden initiated by Rep. Josh Gottheimer (D-NJ), had any Democratic signers, with 12. All the letters, either specifically or implicitly threaten to try to scuttle any agreement, no matter what it says.

On April 27, the House passed, under “suspension of the rules,” H.R. 6089, the “Stop Iranian Drones” bill. Introduced in November by Rep. Michael McCaul (R-TX), it would expand the list of weapons covered by sanctions on Iran to include combat drones. When passed, the bill had 77 cosponsors. The Senate companion bill, S. 3421, introduced in December by Sen. Bob Menendez (D-NJ), now has five cosponsors.

Bills were introduced in the House and Senate aimed at preventing Iran’s Revolutionary Guard Corps’ designation as a Foreign Terrorist Organization from being revoked. On March 17, Sen. Roger Marshall (R-KS) with three cosponsors, introduced S. 3871, and on April 1, Perry, with four cosponsors introduced H.R. 7354.

On March 17, Issa, with no cosponsors, introduced H.R. 7129 “to prohibit the importation of crude oil from Iran.” And on April 5, Rep. Bill Huizenga (R-MI), with no cosponsors, introduced H.R. 7402 to, among other things, “prevent the International Monetary Fund from providing financial assistance to Iran, [and] to codify prohibitions on Export-Import Bank financing for the government of Iran.”

H.R. 2590, the “Palestinian Children and Families” bill, introduced in April 2021 by McCollum, still has 32 cosponsors.

Introduced in September by Rep. Andy Levin (D-MI), it aims “to preserve conditions for, and improve the likelihood of, a two-state solution that secures Israel’s future as a democratic state and a national home for the Jewish people, a viable, democratic Palestinian state, an end to Israel’s occupation of the Palestinian territories, and peaceful relations between the two states, and to direct the Department of State and other relevant agencies to take steps to accomplish these ends.”

On May 16, Rep. Rashida Tliab (D-MI) made history by introducing H.Res. 1123, “Recognizing the Nakba and Palestinian refugees’ rights.” The resolution has six cosponsors.

The diluted “anti-Islamophobia” bill, H.R. 5665, introduced in October by Rep. Ilhan Omar (D-MN), “to establish in the Department of State the Office to Monitor and Combat Islamophobia” worldwide, passed by the House in December, is still stuck in the Senate Foreign Relations Committee.

The previously described measures objecting to reopening the U.S. Consulate in Jerusalem have gained support. S. 3063, introduced by Sen. Bill Hagerty (R-TN) in October, “to prohibit the use of funds for a U.S. Embassy, Consulate General, Legation, Consular Office or any other diplomatic facility in Jerusalem other than the U.S. Embassy to the State of Israel,” now has 40 cosponsors.

Of the previously described anti-UNRWA bills introduced “to withhold U.S. contributions to the U.N. Relief and Works Agency for Palestine Refugees in the Near East (UNRWA)” only H.R. 6155, introduced in December by Rep. Lance Gooden (R-TX), has gained cosponsors. Modestly titled the “No Tax Dollars for the United Nation’s Immigration Invasion,” the bill now has 20 cosponsors.

A new bill to withhold funds from UNRWA, S. 3467, was introduced on January 10 by Sen. James Risch (R-ID). It has six cosponsors. It not only attacks UNRWA, but also attacks Palestinian refugees.s

After the U.N. Human Rights Council (UNHRC) indicated that it would not cancel its investigation of Israel for human rights violations during Israel’s May 2021 conflict with Hamas, Rep. Gregory Steube (R-FL), on March 24, introduced H.R. 7223 and 7224 calling for the abolition of the UNHRC and prohibiting any U.S. contributions to it. H.R. 7223 has three cosponsors and H.R. 7224 has five.

And on April 1, Sens. James Lankford (R-OK), Cruz (R-TX), Tom Cotton (R-AR), and Hagerty (R-TN) signed a letter to Secretary of State Antony Blinken urging that the U.S. withdraw from the UNHRC.

PRO-ISRAEL BILLS HAVE BEEN RELATIVELY QUIET, BUT A NEW ONE WAS INTRODUCED

On March 3, Rep. Lee Zeldin (R-NY)  again introduced the “Israel Anti-Boycott” bill, H.R. 6940. As with previous versions of the bill, it would attempt to criminalize supporting or calling for boycotts of Israel. Previous versions of the bill have been strongly criticized by the ACLU and other organizations as being blatant violations of free speech rights. It has 55 cosponsors.

Read about the many bills introduced in Congress about Israel in 2021 here.

Shirl McArthur is a retired foreign service officer. He lives in the Washington, DC metropolitan area.