You Are Here: Home → Biden, Israel, and the Palestinian People

Biden, Israel, and the Palestinian People 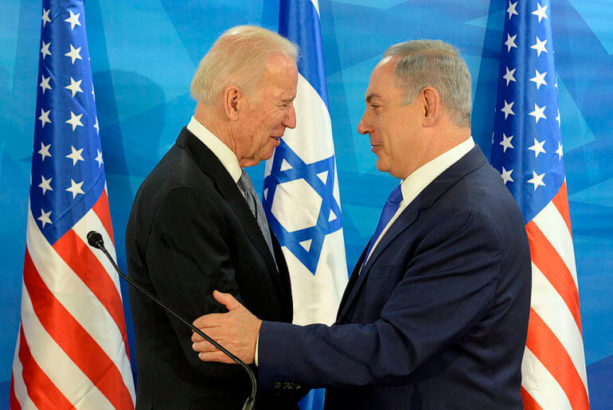 Is there any hope that a Biden administration would break with the candidate’s half-century record of “unstinting support for Israel,” despite Israel’s decades of human rights violations and its apartheid like system? It’s highly unlikely, unless his previous rhetoric has just been a shtick to be discarded when needed.

With presumptive Democratic presidential candidate Joe Biden currently enjoying a six-point lead in a recent national poll conducted by USA Today/Suffolk University, it is not too early to speculate about what a Biden administration foreign policy toward Israel and the Palestinian people might look like.

Based on the former vice president’s current campaign pledges, and past statements made during the Obama administration and throughout his lengthy tenure in the Senate, a Biden administration would not be likely to content itself with reverting to Obama era policies of providing lip service toward Palestinian rights while nevertheless reinforcing US diplomatic and military support for Israel.

Instead, Biden is a throwback to a bygone era when Democrats and Republicans demonstrated equal fealty toward Israel and disregarded Palestinian rights altogether. A Biden administration would likely reflect that outmoded worldview.

Biden’s campaign website situates his proposed policies toward Israel and the Palestinian people not under foreign policy, but as an extension of his “record and a plan of friendship, support and action” toward the “Jewish community”.

Biden’s conflation of old-school Israel advocacy with the supposed interests of an imagined monolithic “Jewish community” is not only a misreading of actual divisions within Jewish- American communities toward Israel. In the Trump era of unabashed white supremacy, this presumed dual loyal trope also inadvertently contributes to the “othering” of Jewish-Americans and helps fuel the deadly resurgence of antisemitism in the United States.

Worse yet is the content of Biden’s positions and proposals, which are barely distinguishable from Trump’s policies, notwithstanding a few tepid critiques. Four of Biden’s six bullet points demonstrating his “unstinting support for Israel” reiterate his commitment to providing Israel with weapons.

Another spotlights his opposition to BDS, despite the participation of many Jewish-Americans in this movement for Palestinian rights. He pledges his administration would “firmly reject the BDS movement” without providing any specifics, potentially leaving open the door for supporting unconstitutional legislative efforts to impinge upon the freedom of speech of people advocating for Palestinian rights.

While Biden promises to “reverse the Trump Administration’s destructive cutoff of diplomatic ties with the Palestinian Authority” (pro tip for Biden’s advisers: the PLO, not the PA, conducts diplomacy on behalf of the Palestinian people) and restore US aid, it is clear that Biden envisions a restoration of the status quo ante rather than any proactive agenda to promote a just resolution.

Biden can’t even bring himself to unequivocally support the antiquated policy option of Palestinian statehood. Instead, he merely pledges “to keep the prospect of a negotiated two-state outcome alive” presumably through further futile peace processing: negotiations for the sake of maintaining the fiction that negotiations are designed to produce an accord.

Reflecting Branko Marcetic’s aptly named book on Biden, Yesterday’s Man, the candidate also yearns for a return to the bygone era of bipartisan comity on Israel. He vows to reverse “Trump’s exploitation of U.S. support for Israel as a political football,” reducing the vast and likely irreversible chasm in public opinion between Democrats and Republicans to the policies of the current president.

However, as Biden is undoubtedly aware, Trump is only an exploiter, not an originator, of the partisan divide over Israel and the Palestinian people. This phenomenon was quite evident already during the Obama administration and was further entrenched by Israeli Prime Minister Benjamin Netanyahu’s deliberate provocations to humiliate and frustrate the policy objectives of President Obama, including his announcement of settlement expansion during Biden’s 2010 visit to Jerusalem.

[Editor’s note: This is a fairly recent phenomenon. In the past it was often Republicans who dared to go against the Israel lobby, e.g. President Eisenhower, Paul Findley, Pete McCloskey, Charles Percy, George Bush Sr, etc. See Paul Findley’s book, They Dare to Speak Out and Alison Weir’s book, Against Our Better Judgment, How the U.S. Was Used to Create Israel.]

Before the coronavirus brought the Democratic primary campaign to a screeching halt, Biden further demonstrated how out-of-step his policies toward Israel are with the base of the party he seeks to lead. As progressive standard-bearers Bernie Sanders and Elizabeth Warren, and even the slickly packaged centrist Pete Buttigieg, raised the possibility of conditioning military aid to Israel, Biden vehemently mooted the idea. In his churlish, “lying, dog-faced pony soldier” manner, Biden called the sensible proposal, which was supported by a majority of Democrats in a 2018 Brookings poll, a “gigantic mistake” and “absolutely outrageous”.

Not only is Biden lagging behind the base of his party when it comes to Palestinian rights. It also appears that his devotion to Israel is sincere, almost mystical, and touching upon his bedrock identity. In other words, his positions on Israel look immutable, in stark contrast to the malleability and tractability of a candidate otherwise unmoored from any coherent set of principles underlying his policies.

Inasmuch as almost any politician could be credited with being genuine, Biden’s 2011 speech to a gathering of 2,000 rabbis and other Jewish leaders in Detroit is worth quoting in some length for the light it sheds on his identification with Israel.

“Although…I was not educated in a Jewish school, I was educated in the traditions of Judaism. I was educated about the oppression and genocide committed against the Jews, the historic ties between the Jewish people and the land of Israel. I was educated at my dinner table by what my Jewish friends at home refer to — and you would — as a righteous Christian, a man who taught us that without vigilance, the safe haven of Israel, it could happen again without Israel.

I got in trouble some years ago…About 18, 20 years ago, I was speaking to the Zionist Organization of Baltimore.  And I said, I am a Zionist, for I learned you do not have to be a Jew to be a Zionist. The fact of the matter is that the man who raised me was absolutely committed to the notion that it should never happen again, the man who could not understand why there could even be a debate about the establishment of the state of Israel. That man was my dad.”

For Biden, commitment to Israel is a mixture of filial piety and a willingness to turn a blind eye to Israel’s oppression as a way to assuage his guilty conscience over Christian antisemitism.

His more than three-decade-long tenure in the Senate also provides ample confirmation of lockstep support for Israel and utter insouciance toward Palestinian rights, perhaps best exemplified by his staunch support for the 1995 Jerusalem Embassy Act, the most consequential piece of Israel-related legislation Congress passed during his Senate career.

The bill required the president to move the US embassy from Tel Aviv to Jerusalem, but allowed for a loophole invoked by Presidents Clinton, Bush, Obama, and even once by Trump, to keep the embassy in place through a national security waiver.

Passed in the immediate months before Israel and the PLO were supposed to have begun permanent status talks, the act was a provocative attempt by Congress to prejudge these issues in Israel’s favor and was a harbinger of Trump’s policies.

As Michael Arria pointed out last week in The Shift, here is a video of Biden passionately advocating for the bill on the Senate floor while completely eliding over any Christian or Muslims connection to the city or Palestinian national rights therein.

Is there any hope that a Biden administration would break with the candidate’s half-century record of “unstinting support for Israel”? It’s highly unlikely, unless his previous rhetoric has just been a shtick to be discarded when needed.

Perhaps this could be the case. His casual condemnation of Trump’s move of the US embassy to Jerusalem (“The move shouldn’t have happened in the context as it did, it should happen in the context of a larger deal to help us achieve important concessions for peace in the process. Moving the embassy when we did without the conditions having been met was short-sighted and frivolous”) certainly belied the passion of his Senate floor speech.

Indeed, Biden’s adoption of Sanders’s and Warren’s plans on college tuition and bankruptcy reform along with his appropriation of their rhetoric certainly lends credence to the theory that Biden is a shape-shifting, unprincipled politician willing to adopt policies and positions to bolster his popularity. Potentially Biden could flip-flop on Israel and the Palestinian people as well in a similar manner if he feels the pressure to do so from the base of his party and a growing contingent of Democratic Members of Congress pushing for change.