You Are Here: Home → Ha’aretz: Ben-Gurion in 1951: Only Death Penalty Will Deter Jews From Gratuitous Killing of Arabs

Ha’aretz: Ben-Gurion in 1951: Only Death Penalty Will Deter Jews From Gratuitous Killing of Arabs 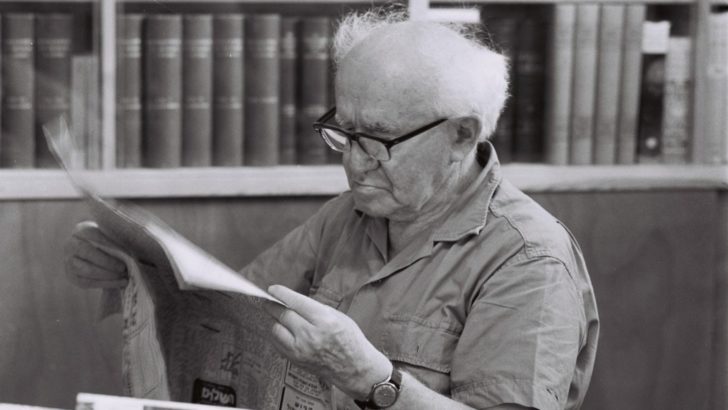 Ben-Gurion was speaking at a cabinet meeting on abolishing the death penalty. Jewish-Arab tensions were high following the 1948 War of Independence, and there was also a problem with infiltrators: Arab refugees seeking to return to the homes and fields they left during the war. Consequently, Jewish murders of Arabs had proliferated, and some ministers considered the death penalty necessary to solve this problem.

“In general, those who have guns use them,” Ben-Gurion asserted, adding that some Israelis “think Jews are people but Arabs aren’t, so you can do anything to them. And some think it’s a mitzvah to kill Arabs, and that everything the government says against murdering Arabs isn’t serious, that it’s just a pretense that killing Arabs is forbidden, but in fact, it’s a blessing because there will be fewer Arabs here. As long as they think that, the murders won’t stop.”

Ben-Gurion said he, too, would prefer fewer Arabs, but not at the price of murder. “Abolishing the death penalty will increase bloodshed,” he warned, especially between Jews and Arabs. “Soon, we won’t be able to show our faces to the world. Jews meet an Arab and murder him.”

The cabinet first discussed abolishing the death penalty – a legacy of the British Mandate – in July 1949, at the urging of Justice Minister Pinhas Rosen. Ben-Gurion was dubious even then. He said he would support the bill, but was almost certain the death penalty would ultimately be reinstated, because abolishing it “will lead to a proliferation of murders.” After intense debate, the cabinet agreed to abolish the death sentence except for treason during a state of emergency.

The bill then went to the Knesset, where the Constitution Committee held lengthy deliberations. A year later, Rosen presented the cabinet with a problem: Seven prisoners were on death row, but their executions were being delayed until the Knesset made up its mind about the death penalty.

As the cabinet discussed this issue, Ben-Gurion stunned his colleagues by saying he no longer supported abolishing the death penalty, primarily due to an increase in killings of Arabs by Jewish soldiers.

Foreign Minister Moshe Sharett, who in 1949 had supported abolishing the death penalty on the grounds that “Human society must aspire to a moral level at which it’s forbidden to take human life,” also unexpectedly reversed himself at this meeting.

“With great regret I’ve become convinced that abolishing the death penalty is inconceivable,” he announced, noting that even countries “which are immeasurably more humane than we are – I’ve spent years there and I live here – maintain the death penalty.”

The main reason for his U-turn, however, was “the crimes that have happened and are happening week after week, especially in the army,” including some that weren’t public knowledge. Sociopaths might not be deterred by the death penalty, Sharett admitted, “but that Jewish chap who kills two Arabs he met on the road, I’m not willing to say, without trying it first, that he’s a killer by nature and won’t fear the death penalty.”

Some Jews, Sharett said, think “every Arab is a dog, a wild dog that it’s a mitzvah to kill.” And “to save them from killing human beings, it’s a mitzvah to have the death penalty here. As long as we don’t have it, these murders will continue, and we’ll be held accountable, and it will create moral corruption here.

“I’ve giving a speech of repentance and confession here,” he continued. “I’ve learned from experience that in this country, the death penalty is necessary… We made a mistake when we stopped hanging… If all the crimes committed in this country were reported, terror would grip the public and lynchings would start. I’d shoot a Jewish chap who wanted to shoot an Arab passerby if that were the way to save him.”

Sharett then described one case in which three Arabs were killed and a fourth saved only because a Jew threw him into a hut, and another case in which two Indian Jews were almost killed by fellow Jews who thought they were Arabs until they shouted “Israel.”

Minister Dov Yosef backed Ben-Gurion and Sharett. “In principle, I’ve opposed hanging as a penalty all my life, but unfortunately, in this country and today’s situation,” it’s needed, he said.

“There have been worse cases,” Ben-Gurion responded.

Ministers Golda Myerson (later Meir) and David Remez, in contrast, remained opposed to the death penalty, but agreed that much more must be done to prevent crimes against Arabs.

In the end, the death penalty was abolished – but only three years later, in 1954.

Top photo: David Ben-Gurion at his home in Sde Boker in 1968.