You Are Here: Home → Another win for Palestinian rights and BDS

Another win for Palestinian rights and BDS 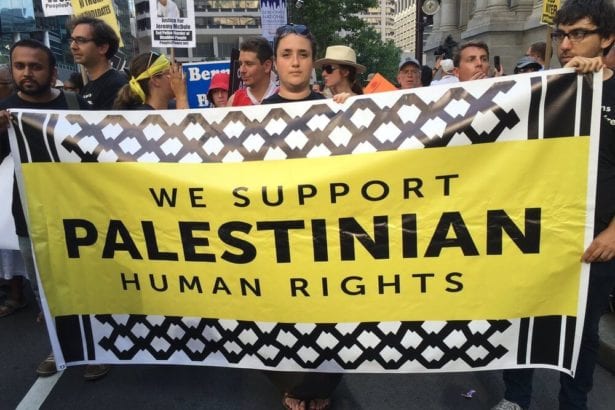 US Campaign for Palestinian Rights, a national network of activists and organizations that work to end U.S. complicity in the oppression Palestinians, reports a big win for BDS, the Boycott, Divest, and Sanctions movement.

In the second important win for Palestinian rights and BDS this month, a federal judge has dismissed a Jewish National Fund lawsuit that targeted the US Campaign for Palestinian Rights for alleged terror connections over its support for BDS.

A federal judge has dismissed a lawsuit that targeted a Palestinian rights organization for alleged terror connections.

In 2019 the Jewish National Fund (JNF), and 12 American citizens living in Israel, sued the US Campaign for Palestinian Rights (USCPR) for $90 million. The lawsuit alleged that USCPR had funneled money to Boycott National Committee (BNC), which was then used for terrorist activities. The USCPR was represented by attorneys at the Center for Constitutional Rights (CCR).

The complaint asserts the money was used to release balloons that ended up causing “extreme emotional pain” for people in Israel. “[M]embers of the public have been denied the use and enjoyment of KKL-JNF forests and public areas including scenic trails, recreation areas, bicycle trails and public areas and amenities provided by KKL-JNF and others for their use and enjoyment, as the rockets, incendiary terror balloons and kites have interfered with the public’s health, safety and peace,” it reads.

A DC judge dismissed the lawsuit and ruled that it was “to say the least, not persuasive.”

“We have been looking forward to this day and welcome the court’s decision,” said USCPR Executive Director Ahmad Abuznaid in a statement. “This should reinforce to all advocates of freedom for the Palestinian people that we will not be silenced, siloed, or stopped. Justice for all is the only way forward.”

Lawsuits like this one are frequently implemented by pro-Israel groups in an attempt to bog down Palestinian organizations and stifle support for movements like BDS.

“The smearing of human rights advocates as terrorists is a troublingly common and dangerous tactic. The JNF’s complaint perversely cites our clients’ human rights advocacy in an attempt to support their ultimately fruitless effort to hijack U.S. courts,” explained CCR staff attorney Diala Shamas in a statement, “We are glad the court did not let these meritless claims stand, and we hope this marks a turning point that discourages private actors seeking to weaponize terrorism laws to silence their critics.”