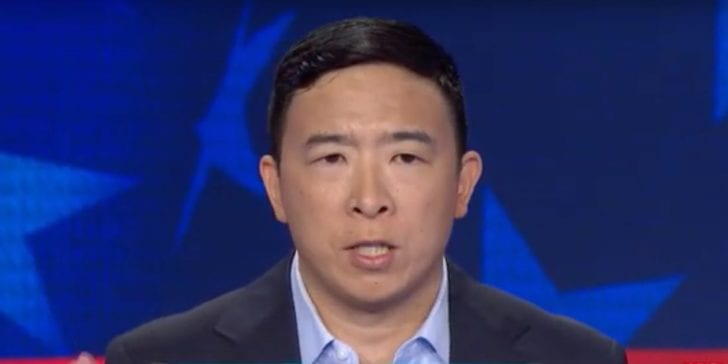 NY mayor candidate Andrew Yang claims BDS is “rooted in antisemitic thought and history” going back to Nazi boycotts of Jewish businesses. BDS is NOT aimed at Jewish businesses; it targets Israel for its massive violence against Palestinians and denial of Palestinian human rights.

(A sample email is below.)

Entrepreneur Andrew Yang announced a run for New York mayor last week and today he penned a piece for the Forward, titled “My Vision for New York City’s Jewish Community” in which he said that the nonviolent Boycott, Divestment and Sanctions campaign targeting Israel is “rooted in antisemitic thought and history, hearkening back” to Nazi boycotts of Jewish businesses.

“[N]ot all hate crimes are committed by organized neo-Nazis,” Yang wrote, speaking of the need for empathy across racial and religious lines. Then:

A Yang administration will push back against the BDS movement, which singles out Israel for unfair economic punishment. Not only is BDS rooted in antisemitic thought and history, hearkening back to fascist boycotts of Jewish businesses, it’s also a direct shot at New York City’s economy. Strong ties with Israel are essential for a global city such as ours, which boasts the highest Jewish population in the world outside of Israel. Our economy is struggling, and we should be looking for ways to bring back small businesses, not stop commerce.

The op-ed promptly won praise from the Democratic Majority for Israel, an interest group that has poured resources into pro-Israel candidates.

Yang’s comments are obviously intentional and instrumental. He is a mainstream candidate– and front runner– who is likely to take the right-wing lane in the Democratic primary against opponents Scott Stringer and Brooklyn Boro President Eric Adams.

But Yang’s statement that BDS, a nonviolent movement started by Palestinians who are discriminated against in countless ways, is rooted in antisemitism and is kin to Nazi boycotts stirred outrage on the left.

By likening the non-violent Palestinian civil society call for international solidarity to hold Israel accountable for human rights violations – which is inspired by the civil rights and anti-apartheid movement – to Nazism(!), you show ignorance & smear a people asking to be free

So @AndrewYang, how many Palestinians did you actually speak to before deciding to smear them in the course of your political campaign?

The progressive group The Jewish Vote wrote that not all Jews will like Yang’s stance.

Jews AREN’T a single-issue voting bloc. We’re tired of being treated like one. If @AndrewYang wants to win our votes, he should focus on #TaxTheRich, Defund the Police, a #GreenNewDeal—NOT equating a nonviolent human rights tactic to literal Nazis.

Yang’s comments are especially distressing because they follow a bombshell human rights report by a leading Israeli group saying that Israel is an “apartheid regime” from the river to sea. The clear response to apartheid is an international boycott.

Your ignorance on this issue is toxic. Many Jewish New Yorkers support the BDS movement as a non-violent form of protest against Israeli apartheid, and you’re calling them anti-Semites?

This is an absurd characterization of #BDS.Very unfortunate that Yang would speak at length on a topic he obviously knows nothing about. There is room for reasonable debate about BDS. It is rather telling that, rather pursue such legitimate debate, BDS opponents lie about it.

My great-grandfather was in the shmata business on Rivington. For him to compare BDS to “fascist boycotts” shows no understanding of either fascism, anti-Semitism, or the occupation of Palestine

Yang effectively endorsing apartheid and offering a take with dual loyalty connotations all at once.

BDS is not aimed at Jewish businesses; it targets the Israeli denial of Palestinian human rights. [The BDS website says: “BDS upholds the simple principle that Palestinians are entitled to the same rights as the rest of humanity.”]

I believe Andrew Yang knew just what he was doing. It won’t hurt him with his middle of the road base, and it will only help him with the New York establishment and more conservative Jews. Political observer Abe Silberstein notes the importance of donors:

I’m not surprised Yang is taking a strong position against BDS. It’s a cost-free statement (for him) and it could bring in donors who otherwise would have stayed on the sidelines. And if those donors are from NYC, there is an 8:1 match.

Governor Andrew Cuomo has made opposition to BDS a keystone position of his administration. And Andrew Yang already has the endorsement of Ritchie Torres, the new congressperson who won in part by touting Israel.

Torres got the endorsement of the Democratic Majority for Israel, as did Raphael Warnock, the pastor who just was sworn in as a new senator from Georgia. Warnock won that endorsement by walking back statements critical of Israel. Yang has obviously seen all this and figured out his tactics.

As for The Jewish Vote’s claim that Jews are not monolithic, Yang’s stance will surely hurt him with left-wing Jews. But it will help him with other Jews, who are surely more empowered. 95 percent of American Jews support Israel, says Batya Ungar-Sargon, formerly of the Forward; that’s surely an exaggeration but if the number is closer to 70 percent, it means that anti-Zionist Jews are still marginal in the American Jewish community.

I was deeply disappointed to see your statements claiming that the Palestinian boycott, divestment, and sanctions movement is “rooted in antisemitic thought and history” going back to Nazi boycotts of Jewish businesses.

The BDS movement is not targeting Jewish businesses, but rather Israel’s oppression of Palestinians.

Given the devastating report of renowned Israeli human rights organization B’Tselem that Israel is operating an apartheid regime, my question to you is: What you would have people of integrity do in the face of this apartheid, if they must not follow the kinds of nonviolent tactics used to protest apartheid in South Africa?