You Are Here: Home → America or Israel? Quislings in Congress and the Media need to decide which comes first

America or Israel? Quislings in Congress and the Media need to decide which comes first 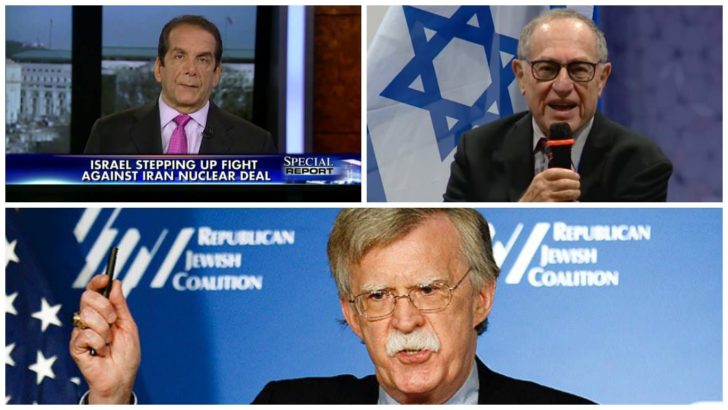 Philip Giraldi criticizes individuals and institutions who place Israeli interests above American principles and needs. He names Harvard Professor Alan Dershowitz, journalist John Krauthammer, John Bolton, The Washington Institute for Near East Policy (WINEP), the Jewish Institute for National Security Affairs (JINSA), Brookings, the American Israel Public Affairs Committee (AIPAC), the Foundation for Defense of Democracies (FDD) “and the rest of the alphabet soup that depend on the generosity of pro-Israel donors to keep the lights on.”

Giraldi, a former CIA officer who is now executive director of  CNI , writes that the US decision not to vote against the UN Security Council resolution condemning Israeli settlements, was a positive development:

“Having the U.S. finally vote on the side of sanity and fairness is really a good thing for Americans and hopefully will lead to severing a bizarre “special relationship” that supports a kleptocracy in Asia that has been nothing but trouble.”

Even as Israeli Prime Minister Benjamin Netanyahu and his gaggle of war criminals continue to foam at the mouth over the United Nations vote it is, in truth, difficult to blame Israel for what is happening. The Israelis are acting on what they see as their self interest in dominating their neighbors militarily and having a free hand to deal with the Palestinians in any way they see fit. And as for their relationship with Washington, what could be better than getting billions of dollars every year, advanced weapons and unlimited political cover in exchange for absolutely nothing?

Surely even Prime Minister Benjamin Netanyahu knows that the settlements are illegal under international law and are an impediment to any peaceful resolution with the Palestinians, which is what Resolution 2334 says. It has been U.S. policy to oppose them since they first starting popping up like mushrooms, but Netanyahu has encouraging their expansion in full knowledge that he is creating facts on the ground that will be irreversible. He has also pledged to his voters that he will not permit the creation of a Palestinian state, so why should anyone be confused about his intentions?

Daniel Larison over at The American Conservative summed up the situation perfectly, observing that “… Israel isn’t actually an ally, much less a ‘vital’ one, and it certainly isn’t ‘critical’ to our security. The U.S. isn’t obliged to cater to some of the worst policies of a client government that has increasingly become a liability. The real problem with the U.S. abstention on the resolution is that it came many years after it might have done some significant good, and it comes so late because Obama wasted his entire presidency trying to ‘reassure’ a government that undermined and opposed him time and again.”