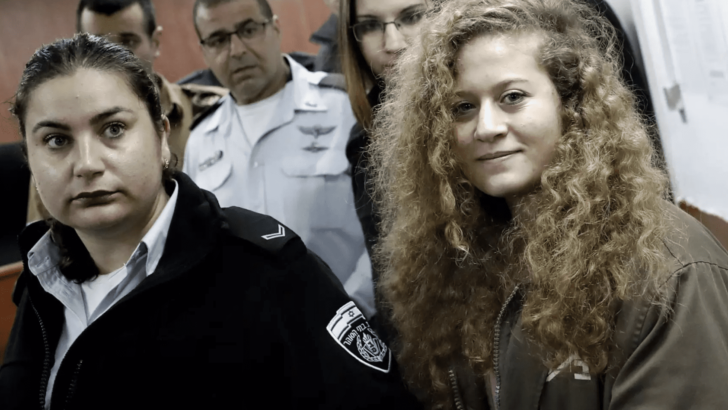 Seventeen-year-old Palestinian Ahed Tamimi (R) arrives for the beginning of her trial in the Israeli military court at Ofer military prison in the West Bank. Tamimi is facing 12 charges, which could lead to years in prison (Credit:THOMAS COEX/AFP)

Both Ha’aretz and Al-Jazeera reporters see through the stern exterior of the closed-doors trial of Palestinian icon Ahed Tamimi:

Magdalena Mughrabi from Amnesty International stated, “Israeli authorities have responded to acts of defiance by a Palestinian child with measures that are entirely disproportionate to the incident in question,” while Bill Van Esveld of Human Rights Watch declared, “Her case raises concerns that Israel’s military justice system, which detains hundreds of Palestinian children every year, is incapable of respecting children’s rights.”

Ahed Tamimi, the Palestinian teenager arrested for making the occupation look bad, will no longer be allowed to make the occupation look bad. As she was brought in Tuesday to the Ofer military court near Jerusalem for pre-trial motions, the judge, Lt. Col. Menachem Lieberman, decided it “would not be in her interest” to have anyone but her lawyers and family members present.

This was a stroke of genius by the judge. As an Israel Defense Forces officer, Lieberman has two duties. He has to satisfy the desire for retribution on the part of the Israeli public that’s enraged that a 16-year-old (at the time) Palestinian had been allowed to push around and slap an IDF officer, while being filmed outside her home in Nabi Saleh, in the West Bank, two months ago. At the same time, he must do everything in his power to prevent the court from becoming a media circus and providing Tamimi, her family, lawyers and activists with a convenient opportunity to put the occupation on trial.

That this would happen was never in doubt: A couple of hundred journalists, diplomats and employees from human rights NGOs arriving in the pelting rain and lining up go through the metal detectors at the courthouse were ample proof that despite the Palestinian issue have gone down on the international agenda recently – some scenes are just too compelling for the media to ignore. As those in line tried to push through in the fear of missing the hearing, relatives of other Palestinian prisoners going on trial were pushed back.

“If you care so much about the Palestinians, why don’t you let actual Palestinians through,” shouted an Israeli guard at the foreign journalists. “He has a point,” a veteran Israeli human-rights observer muttered under her breath. “There are 351 other Palestinian minors currently in Israeli jails. None of them are going to get any attention.”

Three young female officers of the IDF Spokesperson’s Unit were efficiently marshalling the media. They promised everyone would be allowed in before the trial began, and they delivered. An hour after the original scheduled time, with the courtroom packed, there was still no sign of the judge or the defendant. While the cameras jostled up front in the hope of a frame, there was a faint air disappointment among the reporters in the room.

The Tamimi relatives who arrived didn’t include any of the family’s more accomplished media stars (three of whom are under arrest) and the attempt of one cousin to display a home-drawn happy birthday poster for the defendant – who recently turned 17, behind bars – caused just a short flurry of excitement before the guards ordered her to take it down.

A group of suited European diplomats who were present in an uncertain capacity huddled unhappily at the other side of the courtroom while human rights activists tried to brief reporters in the hope of getting a mention of their organization. A small band of Israeli women in their 70s milled around, talking of the Tamimis as if they all were on first-name terms. A Meretz member of Knesset stood forlornly in the middle of the courtroom. When asked on whose side he was, he couldn’t make up his mind whether it was the defendant or the IDF soldiers. “I’m against violence,” was his conclusion.

An hour after proceedings were due to begin, without any notice, everyone was ordered out, except the family. “Judge’s orders, judge’s orders” – and then, “diplomats can go in.”

For a few seconds, courtroom No. 2. at Ofer resembled a normal courtroom, with just a few polite diplomats and docile relatives (and one or two journalists mistaken for diplomats). Tamimi was brought in, looking very calm and composed. Even a bit amused. Without much of an audience, it could have just been any teenager being charged of disorderly conduct.

But the journalists were clamoring outside and the judge allowed them in – after Tamimi was shepherded out again – for discussion on the first point of business: whether to hold the proceedings behind closed doors. After the reporters came in a two-minute exchange between Lieberman and Tamimi’s lawyer Gabi Lasky ensued.

“Since the defendant’s arrest was filmed and broadcast by the army and police despite her being a minor, we need the media in the courtroom for her defense,” argued Lasky.

“I don’t see how it’s in the defendant’s interest to have a hundred people here; she has her family here. It’s enough,” ruled Lieberman. And that was that.

Another short recess to clear the court of journalists and only then was Tamimi brought back in. Lasky was so passionately addressing the media outside that she missed the start of pre-trial motions as the hearing resumed. But she was right. What happens in courtroom No. 2 is meaningless. She and Lieberman both know that.

Tamimi was not arrested and put on trial for pushing around a Givati Brigade company commander. For him it was just another day on duty in Nabi Saleh; for her, the hundredth time she has confronted IDF officers in her short life. If her mother hadn’t filmed the altercation and streamed it on Facebook, and if a far-right Israeli blogger had not picked up on the viral video, posting it to his followers and provoking howls of indignation about how weak the army has become – Tamimi would never have been arrested, with an IDF film crew attending, three days later. She wouldn’t have been under arrest and there wouldn’t be a trial now and there wouldn’t be a need to close the courtroom doors because of international embarrassment. The two military prosecutors slumped unnoticed at their desk in the distant corner knew that as career officers and trained lawyers, they had no business being there. The IDF Spokesperson’s Unit that was sending three young women to represent Israel on this front of the PR war knows it as well: If they had anything to proud of, there would have been a much more senior, male officer briefing the reporters.

Ahed Tamimi’s trial gets under way behind closed doors

Bethlehem, occupied West Bank – The trials of a prominent Palestinian teen activist and her mother have begun behind closed doors after an Israeli military judge banned media from entering the court.

Ahed Tamimi, 17, was arrested in December after a video of her slapping and hitting two Israeli officials outside of her house in the village of Nabi Saleh went viral. Her mother, Nariman, was arrested soon after.

Court proceedings began on Tuesday at Israel’s Ofer detention centre, with only family members allowed into the hearing  after the judge barred reporters despite a request for a public trial by Gaby Lasky, the lawyer of the Tamimis.

“The court decided to close the doors because they think that it’s not good for Ahed. But what I think is that the court doesn’t think it’s good for the court,” Lasky told reporters.

The hearing was the first court session since the judge ruled last month to keep the mother and daughter in Israeli custody for the duration of their trials.

Ahed’s hearing lasted for two hours and her next court session is scheduled on March 11. She is tried separately from her mother, whose next hearing is set on March 6.

The teen, who turned 17 while in detention, is facing 12 charges, including alleged assault and “incitement”, and could spend up to 10 years in prison if found guilty.

The viral video was filmed shortly after Ahed was informed that her 15-year-old cousin had been severely wounded by Israeli forces who had shot him in the face with a rubber-coated steel bullet.

Amit Gilutz, spokesperson for Israeli rights group B’Tselem, said all of the practices being used against Ahed and Nariman “are completely routine” for Palestinians in the occupied West Bank.

“The military courts themselves are one of the most injurious mechanisms of the occupation and are not designed to seek justice or truth, but to maintain the occupation,” Gilutz told Al Jazeera.

Both Ahed and her mother have been held in Israel’s HaSharon prison for almost two months.Ahed has since become an icon for the 330 Palestinian children currently held in Israel’s prisons, and rights groups have demanded her immediate release.

“As an unarmed girl, Ahed posed no threat during the altercation with the two Israeli soldiers who were heavily armed and wearing protective clothing,” Magdalena Mughrabi, deputy director for Amnesty International’s Middle East and Africa programme, said in a statement on Monday.Mughrabi said Ahed had not done anything that could justify her continued detention and “the long, aggressive interrogation sessions she has been forced to endure”.

“Yet again, the Israeli authorities have responded to acts of defiance by a Palestinian child with measures that are entirely disproportionate to the incident in question,” she added.Human Rights Watch (HRW) also condemned the teen’s detention.

Tamimi’s trial “is both a violation of international law and unnecessary”, Bill Van Esveld, an HRW senior researcher, said in a statement on Monday.”Her case raises concerns that Israel’s military justice system, which detains hundreds of Palestinian children every year, is incapable of respecting children’s rights.”

Since Ahed’s arrest, Israeli forces have continued a crackdown on Nabi Saleh residents, according to Manal Tamimi, a relative of the teen and her mother.Manal’s two sons have been held in Israeli custody since being arrested by Israeli forces last month.

Since Ahed’s arrest, at least nine other members of the Tamimi family have been arrested, five of whom remain in Israeli custody. Most were detained during overnight Israeli army raids.

Amid this environment, Manal said that Nabi Saleh residents initiated training and drill sessions for the community’s children and young adults to prepare them for potential arrests and interrogations by Israeli forces.

During the training, children were blindfolded and their hands bound behind their backs – a typical scene during overnight Israeli raids in the occupied West Bank.Manal told Al Jazeera the drills were necessary to “prepare our children for Israeli detention tactics and to make sure they understand their rights”.The village has also faced rising threats from settlers residing in Israel’s illegal Halamish settlement, located adjacent to the home of the Tamimi family.

Earlier this month, locals said Israeli settlers had snuck into Nabi Saleh in the middle of the night and sprayed graffiti around the village, including slogans such as “Death to Ahed Tamimi” and “There’s no place in this world for Ahed Tamimi”.