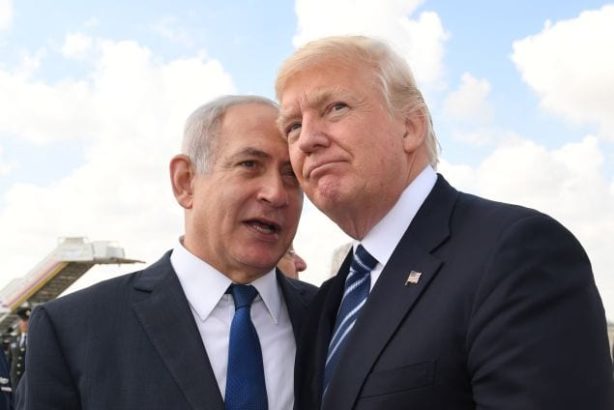 Trump ties to Israel are starting to crystallize as the Mueller investigation digs deeper, and links to shadowy Israelis appear just as troubling as those to dodgy Russians. This may explain why Israel enjoys a kind of eternal favored nation status from a president who is on-again-off-again with everyone.

by John R. Schlinder, The Observer

Our media has followed the Justice Department’s investigation of President Donald Trump’s ties to Russia closely for more than a year, with each revelation getting granular analysis amid endless television coverage. No news here is too small to avoid hours of talking-head pontification. Yet, it appears that a significant aspect of the inquiry, one that calls the conventional narrative of the case into question, has been missing from public view—until now.

A genuine bombshell dropped yesterday, seemingly out of nowhere. It came in an interview with Simona Mangiante, the wife of George Papadopoulos, the Trump campaign foreign policy advisor who pled guilty last October to lying to the FBI about his contacts with Russian agents—especially Joseph Mifsud, the mysterious Maltese professor with suspicious Kremlin ties—during the president’s election campaign. As expected, Mangiante explained that her husband, whom she married just three months ago, is innocent of what he admitted he did, and in no way was working for Russian intelligence.

“George had nothing to do with Russia,” she explained, seemingly in an effort to convince the White House that Papadopoulos lacks any dirt on the president’s Kremlin connections that could assist Special Counsel Robert Mueller in his investigation of Team Trump. However, what Mangiante said next was the real shocker: her husband “pled guilty because [Mueller’s prosecutors] threatened to charge him with being an Israeli agent.”

According to his wife, who insists that George Papadopoulos has nothing to do with Russia, he was facing criminal charges of being a spy for Israel. An attentive reader of her interview will note that Mangiante at no point denied that this accusation is true.

The notion is hardly implausible. Before joining the Trump campaign in early March 2016, Papadopoulos was a self-styled energy consultant who was known for taking strongly pro-Israeli positions in print. To boot, during the 2016 campaign, he met with an Israeli settler leader and assured him that Donald Trump, if elected president, would take a favorable view of Israeli settlements in the West Bank.

Then there’s the backstory to Papadopoulos’ infamous May 10, 2016 meeting at an upscale London wine bar with Alexander Downer, the Australian high commissioner (i.e. ambassador) to Britain. At that hard-drinking affair, the young Trump staffer informed Downer that Russia possessed derogatory information about Hillary Clinton—a claim the Australian diplomat found so troubling that he shared it with Australian security officials, who passed it on to their American partners, thus officially beginning the FBI’s investigation of Trump’s Kremlin ties.

That fateful boozy chat was set up by an unnamed Israeli diplomat. This fact, namely that “the meeting came about through a series of connections involving an Israeli diplomat who introduced Papadopoulos to an Australian counterpart,” was reported at the end of last year, “sourced from four current and former American and foreign officials.” This revelation has not been rebutted, nor has it received the attention it deserves. Given that a high percentage of Israeli diplomats serving abroad are spies, this story needs further investigation.

Moreover, there are strange Israeli footprints all over the Trump-Russia story. Quite a few of the shady figures close to the president and his business affairs are American Jews of Soviet heritage who possess connections to Israel. Felix Sater and Michael Cohen are only the best-known of this dubious crew. Those men are also connected to Chabad of Port Washington, a Jewish community center on Long Island that is part of the worldwide Chabad movement—which reportedly possesses close links to Vladimir Putin and his Kremlin. The recent BBC report that Cohen accepted at least $400,000 from the Ukrainian government to set up a substantive meeting with President Trump last year included the tantalizing detail that this dirty deal ran through attendees of Chabad of Port Washington.

Then there’s the explosive New York Times report just two weeks ago about a hush-hush meeting in Trump Tower on August 3, 2016—less than two months after the other hush-hush meeting there with Kremlin operatives—between Team Trump and George Nader, who reportedly offered Donald Trump, Jr. help with getting his father elected. According to the Times, Nader proffered unofficial (and probably illegal) foreign aid to the Republican nominee’s campaign, including from Saudi Arabia and the United Arab Emirates.

That day, Nader brought with him Joel Zamel, an Israeli expert in several things that were of interest to Team Trump, including social media manipulation. Zamel is known to possess a close relationship with a bunch of former Israeli intelligence officials, and Nader reportedly paid him a large sum, perhaps as much as $2 million, after Trump’s election as compensation for Zamel’s shadowy social media assistance to the president-elect’s campaign in 2016 (both men visited the White House as well).

Zamel is best known as the founder of Wikistrat, a private intelligence firm that was founded in 2010, ostensibly as a “crowdsourced” geopolitical analysis outfit. Although it’s based in Washington, D.C., as The Daily Beast recently uncovered, “Wikistrat is, for all intents and purposes, an Israeli firm; and that the company’s work was not just limited to analysis. It also engaged in intelligence collection.” For this reason, Wikistrat is under investigation by Team Mueller, whose investigators have interviewed Zamel, while FBI agents have traveled to Israel to dig deeper. Several prominent Wikistrat staffers formerly worked for Israeli intelligence—and some experienced espionage professionals in our nation’s capital wonder if they still do.

Israeli espionage against the United States is a perennially touchy subject in Washington. This issue is admitted frankly in counterintelligence circles—and nowhere else. Israel constitutes a unique case. Although it’s a close ally and intelligence partner of ours—the relationship between the National Security Agency and the Israel Defense Force’s Unit 8200, its Israeli equivalent, is exceptionally close—Israel also spies on America aggressively. Year in and year out, Israel ranks in the Big Four counterintelligence threats to the United States, alongside Russia, China and Cuba. It’s not politic to mention this in polite society, however, so the counterspies know a lot about Israel’s spying on us, keeping mum outside their esoteric realm.

Indeed, some counterintelligence pros in Washington have a rather different take on the Mueller inquiry than most Americans do. While Moscow’s secret role in subverting our election in 2016 is plain to see and is now denied only by the willfully obtuse or congenitally dishonest, detecting a direct Kremlin hand on the Trump campaign is trickier. Trump’s links to Moscow are visible but remain somewhat obscure.

His ties to Israel, however, are much plainer to see. Based on the available evidence to date, Team Trump’s 2016 links to shadowy Israelis appear just as troubling as those to dodgy Russians—indeed, in some cases they are the very same people. As a veteran counterspy in our Intelligence Community whom I’ve known for years recently asked me with a wry smile, “What if the real secret of the Trump campaign isn’t that it’s a Kremlin operation, rather an Israeli operation masquerading as a Russian one?”

That’s a provocative question, but it merits consideration beyond counterintelligence circles. After all, Putin and his retinue have ample reason to feel let down by Trump. His greasy obsequiousness to Moscow aside, the president’s policies towards Russia have hardly pleased the Kremlin. Sanctions on Russia remain in effect, NATO’s military posture near Russia’s borders is more robust than a couple years ago, and Ukraine is now getting the anti-tank missiles that the previous White House denied it. Unlike so many of Trump’s assertions, his claim that he’s tougher on Moscow than President Barack Obama happens to be true from any policy perspective.

But not so with Israel. Unlike Obama, Trump has gone whole-hog for the Israeli right-wing, boosting Prime Minister Benyamin Netanyahu, who openly despised Obama, at every opportunity. The recent move of our embassy to Jerusalem, long desired by the Israeli Right, is merely the most prominent of Trump’s gifts to his pal Bibi and his ruling Likud party. Sending a right-wing American Jew who has compared his more liberal co-religionists to Nazi collaborators to serve as our ambassador sent a clear message to Israel, as did the Trump administration’s recent inability to say anything negative about the IDF’s shooting last month of more than a thousand Palestinians at the Gaza border fence, killing 60 of them. Instead, the White House blocked a United Nations resolution condemning that Israeli deed, serving as a tacit endorsement of using automatic weapons for crowd control.

Few of America’s friends around the world are happy with the Trump administration, given its habit of gleefully trashing our longstanding alliances and declaring trade wars on our allies. Israel stands as a significant exception, however, and it’s no wonder that Mueller and his investigators are trying to get to the bottom of what certain Israelis were doing in 2016 in secret to boost the Trump campaign. That answer may eventually prove just as important as Mueller’s inquiry into the Kremlin and its clandestine attack on our democracy two years ago.